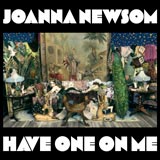 Releasing a triple album subtly indicates that an artist is trying to make a major statement, and with Have One on Me, Joanna Newsom aims for no less than the scope and gravity of All Things Must Pass. If the album doesn’t quite top that masterpiece, it’s still a stunning listen, weighty and masterful where most contemporary releases feel clipped and tossed-off. Running wild with ambition over two hours and change, Newsom incorporates the tambura, channels Kate Bush (“Easy”) and Joni Mitchell (“In California”), and crafts a genuine masterpiece with “Go Long,” imbuing the song’s album-typical eight minutes with palpable ache. Criticizing the record for its length is beside the point; it’s like criticizing Nas for rapping too much. Grandiosity is the album’s raison d’être, and to Newsom’s immense credit, her lofty ambitions are mostly fulfilled.