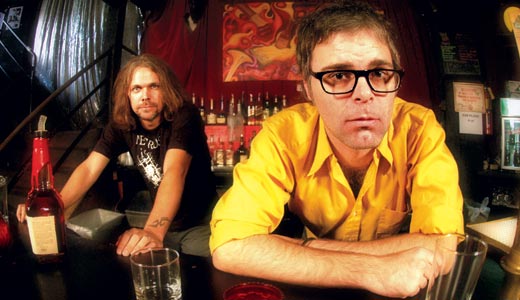 “We haven’t figured it out yet,” Lucas says. “Either the first 100 people in the door, we’ll have a raffle, or else I’ll just pick somebody from the front row. But somebody from the audience will come up and pick a record out of a hat, and we will be forced by the rules to play that record.”

Further impetus for the tour was a seven-night stand Local H did in Chicago in 2008 leading up to the release of 12 Angry Months. The band played each of their studio albums start to finish, plus a night of b-sides and EP tracks, culminating in a live run-through of the new album captured on “68 Angry Minutes.”

Lucas admits that being able to play what amounts to every track the band has officially released on a moment’s notice isn’t easy.

“It is a lot of work, but that doesn’t mean it shouldn’t be done. I think the idea that you should only do enough to get by is bullshit,” he says. “There were a couple of records I was worried about when we did that thing in Chicago, but I ended up having a good time playing them, even the ones I thought I wouldn’t enjoy playing. So it’ll be fun to have another crack at some of these records. The thing about that string of shows was we had one shot, and if you fuck up, you don’t get to do it again. And with this (tour), we tried to figure out the best way to recreate those shows without having to stay in every town for a week.”

“We very rarely come there, and I have noticed that. I’m psyched about that as well. There’s some towns where it never really caught on,” Lucas says. “Louisville is one, and Nashville was always a tough nut to crack. We’ve had a couple of great shows in Nashville, but I remember the first time we played, and it was just abysmal. There’s a couple places where it never quite clicked. Doesn’t mean you stop.”