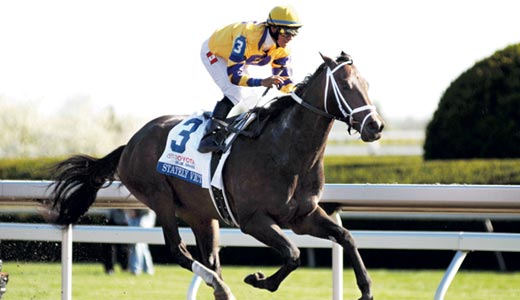 What I’d really like to see is Super Saver rocket out of the gate and go the first quarter mile of the Kentucky Derby in 20-seconds flat.

He could do it. He’s fast enough, and you get the idea watching him champing at the bit in the mornings that the horse, himself, would like nothing better than to set a land speed record in front of a Derby Day crowd of 150,000 at Churchill Downs. Others might be similarly inclined to wing-ding it on the front end, but Super Saver looks the most capable of leading a bunch of baying speed hounds into the first turn at a blistering pace — thus setting the race up for a deep, deep closer to come from way, way back to take the 136th Run for the Roses. Like, say, Stately Victor.

Of course, jockey Calvin Borel is not about to let Super Saver commit pace suicide in the first quarter mile. He’s won the Kentucky Derby twice by coming from far back (Street Sense in 2007, Mine That Bird in 2009) and knows that even if you’re in the lead you have to save something for the end.

In fact, probably all the jockeys have heard reports that this Derby field is so packed with speed it is certain there will be a breakneck early pace. Not just Super Saver, but Rule, Conveyance, Discreetly Mine, Line of David and so on — all horses that only win races wire-to-wire. They’ve all got to get to the front. Pretty much none of them has ever passed a horse in its life.

But you know what happens when everyone thinks a thing is one way — it turns out another.

Suppose, instead, all the jockeys take a hold and slow the pace to a crawl. The field bunches up, everybody waiting and looking, peeking and bobbing — and the race sets up for a horse with the best late kick to come shooting between horses (European style) in a mad dash to the wire. Which would be perfect for jockey Julian Leparoux and Awesome Act.

What probably will happen, however, is neither of those pace extremes will prevail. The race will be run normally, with a fast, but not suicidal early pace. The 20-horse field will get strung out from here to Timbuktu down the backstretch, like it usually does, and the winner will be the best horse — the one that simply prevails through the final half mile. Like you’ve seen so many times before: The winner sweeps to the front turning for home and writes his (or her) name into racing history.

In that very normal circumstance, the logical horse is Lookin At Lucky.

A week ago, we were looking forward as much to picking against phony favorite Eskendereya as picking Looking At Lucky to win.

The way Eskendereya won his final prep race in New York by open lengths, you knew he would be anointed with the coveted Eastern Seal of Approval (highest Beyer Speed Figure) and march on to the Kentucky Derby as the ballyhooed perfect horse arriving at the perfect time. That’s even though Eskendereya comes from the wind- and distance-limited Storm Cat sire line that is 0-for-Ever in the Kentucky Derby.

When Eskendereya subsequently turned in an uninspiring workout at his secluded training home in Florida, we figured the glow might be wearing off, and all might not be perfect in Perfect Land. Arriving at the Downs, Eskendereya galloped along looking rather glum. A muscled horse without a bounce in his step. No surprise: scratched. (Didn’t we see the same thing last year with I Want Revenge?)

Anyhow, that’s all over, and Lookin At Lucky stands as the logical horse for a logical Derby. He’s done the most, winning six of eight starts and $1.5 million, and trained smartly coming to the race. If you wanted to own one horse in this Derby, who else would you rather own?

Lookin At Lucky has certainly been something to look at here in Kentucky. He’s a gleaming bay striding straight down the course, like a streamlined passenger train of another era.

Plus, Lucky is lucky to hail from the preeminent Raise a Native sire line that has produced 16 Kentucky Derby winners, from Majestic Prince in 1969 to Mine That Bird in 2009, including an incredible run of 10 Derby triumphs in the past 15 years. Others from that line include Interactif, Jackson Bend, Noble’s Promise, Dublin, Endorsement, Mission Impazible, Rule and Super Saver. But none appears to have Lucky’s class.

That said, Lookin At Lucky is far from a lock. Either of the aforementioned Stately Victor or Awesome Act could win. They just require a little, uh, projection.

The chances of Sidney’s Candy have been discounted because he’s raced only on synthetic surfaces in California. But Sid’ seems an adaptable sort. The other day, trainer John Sadler sent Sidney’s Candy out to train over a muddy track and joked that his California horse had probably never even seen mud, let alone run on it. But Sidney’s Candy looked good, scooting over the track and dancing back to the barn to have his hooves hosed so he’d look sharp the rest of the day.

Then there’s the filly Devil May Care who has sailed very nicely over the Downs strip. Projecting again, Devil May Care has a style similar to 1980 Derby winner Genuine Risk, the second of three fillies to win the Kentucky Derby. She could relax behind the early pace (maybe in there somewhere near Lookin At Lucky), then rally for home. Devil May Care now gets jockey John Velazquez, who was freed from Eskendereya. Not our pick, but a threat.

When it comes to bloodlines, the premier 1¼ miles pedigree belongs to Setsuko, who, as of Monday, ranked just below the earnings cutoff line, but has been flown from California to Louisville just in case. If the son of Pleasantly Perfect gets in the Kentucky Derby, jockey Olivier Peslier will fly over from France to ride. Look out — this is a live horse.

Betting advice: First, don’t let anybody talk you off your Derby horse. Make your first bet when you walk into the track: a $1 exacta wheel, your horse with all. Proceed to your first mint julep. If your pick wins, you will have the exacta. Cost: $19.

Spending a little more, we suggest a “truncated pyramid” $1 superfecta part wheel, with your best picks at the top, with more horses added below. Perhaps make a syndicate to put in maybe $500, looking for a modest payout of, oh, $15,000.

Nothing like last year’s $278,503 super. Just a nice return for another Kentucky Derby.