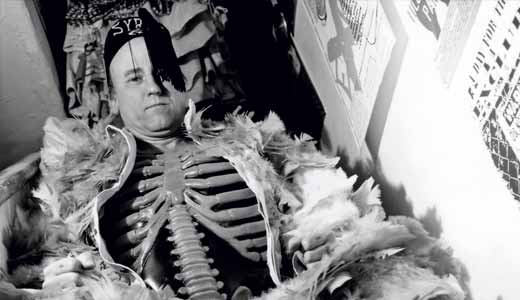 Describing tENTATIVELY, a cONVENIENCE is tricky. For starters, Tent — as he is known — is a veteran filmmaker who identifies himself as a Neoist, and trying to define Neoism is a little like watching a dog chase its tail. But let’s take a crack at it anyway.

At its core, Neoism is a lampoon of its own suffix. That ism on the end is intended as a parody of the other isms found in modern art movements. Central to Neoism is a rejection of categorization and an embrace of methods that intentionally obscure its own definition. In effect, the very essence of this paragraph is anti-Neoist, despite its author’s complete neutrality and lack of ill will toward the subculture.

What is generally accepted across the movement is the importance of impulse and experimentation — qualities certainly on display in Tent’s imposing body of work. He’s produced a remarkable 347 films and “vaudeos” over a three-decade period. His mediums range from 16mm film to Fisher-Price toy cameras to films made with no camera at all.

This was the case for his 154th film, 1993’s “National Cancer Institute Documentary.” Tent cleverly punched sprocket holes into microfiche and ran it through a projector. In this most literal sense, Tent is a maker of film. But because the piece contains a whirring blur of Cancer Institute documents, Tent reasons that he is also a maker of documentary.

“National Cancer Institute Documentary” will be on the bill Tuesday with nine other edgy, somewhat artful works. Tent will be on hand at 21c to introduce each piece and, for more clues on what to expect, see our excerpted interview below.

LEO: Ha ha. Green tongues to you, too! So, what is tENTATIVELY, a cONVENIENCE?

TAC: The answer to the question: “What’s your name?”

LEO: And how did you come to be known by this moniker?

TAC: In 1975 or thereabouts, I was trying to think of a band name, and I was thinking about what function a name serves. My bandmate thought of the name “Crab Feast” so that we could false advertise, and I thought that was so funny that I preferred Crab Feast for the band name and chose “tENTATIVELY, a cONVENIENCE” for myself.

TAC: That was when the tENTATIVELY, a cONVENIENCE entity was created. The reference is to the French writer Alfred Jarry’s character Dr. Faustroll’s being born at age 63.

TAC: I put my date of death in there before my date of birth to make sure it doesn’t happen in my lifetime.

LEO: At 3,080 words, you have, easily, the most impressive e-mail signature I have ever seen. Why was it necessary to include a link to your “Good Reads” profile?

TAC: None of it’s “necessary,” but I love to read and write and similarly inclined people can probably find something there of interest to them.

LEO: Sorry if I’m fixating on “Good Reads,” but it seems you are an obsessive reviewer of books. What about that?

TAC: I’ve read somewhere between 3,000 and 4,000 books in my life so far. One memory assist in reading, just as in recounting dreams, is to write about the experience to help myself retain more of the info. I like to take as many experiences as I can in my life and turn them into creative output. This helps me have a more in-depth, proactive existence.

LEO: I’m guessing that “vaudeo” is a portmanteau for vaudeville and video, yes?

LEO: Any instructions for future audience members not yet familiar with your work?

TAC: I wish us all the best of luck. Most of us will definitely be needing it.

LEO: Best and worst moments in your career as an artist?

TAC: Alas, I’ve been explaining for at least 32 years that I’M NOT AN ARTIST. I certainly don’t have a “career” as one!

To further illustrate his point, Tent refers us to an in-progress essay he calls “My Career: Was it something I said?” What follows are just a few of the essay’s memorable moments:

“My banning from the Baltimore City Paper from 1982 to 1990 because of my fake death threat.”

“I produced work in which I openly announce that I have herpes. This resulted in almost total stigmatization.”

“I participated in a pseudo-‘kidnapping’ of a reporter so that he would then write an article detailing the process. He turned the tables on us and published an article in which no mention of the ‘kidnapping’ was made at all.”