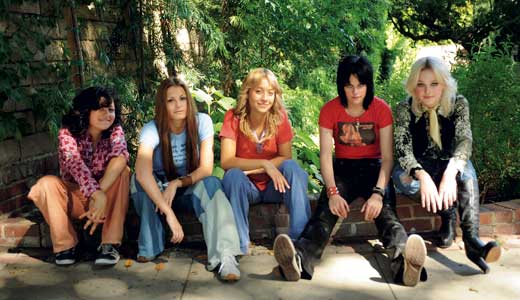 I’ll admit my bias upfront: Joan Jett is hot. She doesn’t just love rock ’n’ roll, she is rock ’n’ roll — from her shaggy, jet-black hair to her raspy growl. “The Runaways,” which chronicles her first foray into pop culture, is entertaining, fun, sad, over the top and somewhat vapid all at the same time — which, come to think of it, sums up rock ’n’ roll pretty well.

The film depicts how The Runaways formed in the mid-’70s, survived the initial highs and lows of a burgeoning rock band, and eventually crumbled due to mismanagement and drug addiction. Jett (Kristen Stewart), a groupie of L.A.’s Sunset Strip, met up with drummer Sandy West and then set out to put together an all-female band. Once they hooked up with the eccentric/creepy record producer Kim Fowley (Michael Shannon), he gave them the green-light to round out the band — including lead singer Cherie Curry (Dakota Fanning), bassist Micki Steele and lead guitarist Lita Ford.

The story centers on Curry’s rise to and subsequent fall from fame. Plucked from an unhappy childhood at 15 to take the lead in a rock ’n’ roll band, the waify blonde took her cues from everyone but herself, which led her to success, but also led her down a path to drug addiction. Fowley demanded the girls rock out like men — harder, faster, louder. In one scene, the always-vulgar Fowley has neighborhood kids throw stones and dog shit at the girls while they practice. In another, to get Curry in particular to portray the confidence necessary for a lead singer in a rock band, he screams, “This isn’t about women’s lib, this is about women’s libido!” It’s in Fowley’s over-the-top rantings and motivational speaker-esque monologues where the film gets a bit campy.

Stewart was perfect as the dark and stormy Jett, who acted as the band’s glue. Jett’s sexuality, which has been in question since even before she ever grabbed a mic, was examined briefly — suggesting she had a relationship with Curry, among other women.

Fanning — who has done a complete 180 from her former roles as “the little sister running from monsters” — gives Curry just enough edge to be believable.

The music, which becomes a character of its own, runs loud throughout, making “The Runways” more like a concert and less like an episode of “Behind the Music.”