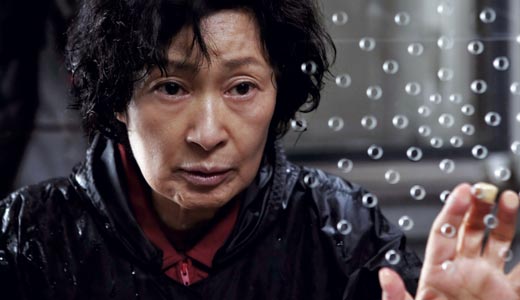 Is it offensive? If it wasn’t so ridiculous and so adamantly jokey, maybe. But as it is, it’s just an unfunny, archaic character who is asked to drive much of the drama and all of the comedy of an uneven thriller.

Bong’s “The Host” was a unique take on the monster-movie-as-political-allegory film. In it, an American chemical spill creates a monster that threatens Seoul. “Mother” lacks any of that movie’s creativity or charm, but it can sometimes get by on loyally and effectively ripping off Alfred Hitchcock.

Do-joon is looked after by the titular helicopter-parent-from-hell (Kim Hye-Ja), who has the unenviable task of being a single parent to a disabled child in small-town South Korea. At least partly because her primary job is looking after him, she’s only able to barely make ends meet by practicing traditional medicine without a license. At least she’s close to her son. Some would say too close.

When a schoolgirl is murdered, Do-joon is the first person brought in. He confesses during interrogation, although he’s clearly oblivious to the meaning of his words and the gravity of the situation. His mother takes up his cause, first by hiring an expensive and apathetic lawyer, then by trying to find the real killer. This provides an excuse to examine the seedy underbelly of her hometown. It proves to be a place replete with corruption, insanity and sex scandals.

In one scene, the mother tries to sneak past a dozing murder suspect. She knocks over a glass of water, and for a few agonizing seconds, you can see the pool widen, threatening to reach the outstretched hand of the suspect. Surely, he’ll wake up to find her hovering over his bed. And surely, he will kill her. It’s an obvious homage to Hitchcock, right down to the strings on the soundtrack.

It’s a good scene, made better by the terror on Kim’s face. She has rightly been praised for her performance in the movie; she’s positively burning with passion for her son. But she is not enough to make this movie, burdened by missteps and obvious references, a particularly good one.

In fact, the better Kim is, the more obvious the rest of the film’s flaws are: Most of the characters are flat, her son makes you cringe and most of the plot is deeply derivative. Like that fateful night for Do-joon, “Mother” simply isn’t memorable.