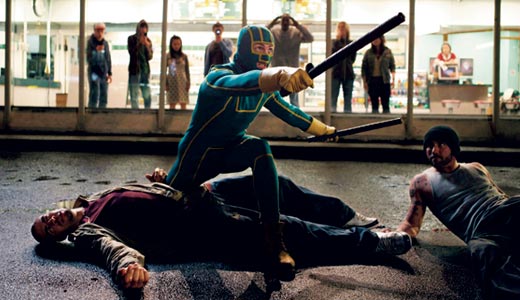 Opening just as the comic does from the unreachable ideal to the stilted and limited real world, the camera flies in through the clouds to land in a nowhere city on a nerdy high school kid. “Kick-Ass” starts with strong acting and dialogue and builds up steam from there. There’s more blood than the comic, all the witty lines you wanted (plus more) and, good god, director Matthew Vaughn (“Stardust,” “Layer Cake”) actually pulls off some breathtakingly original and striking shots. I really don’t know how he found the time — because he also wrote the screenplay.

But enough about the comic. After “Watchmen,” I’ve heard enough BS about what a good job a movie did staying true to the comic, and I want to make it clear: Under no circumstances should the quality of a movie be based on this criteria. That said, this movie stuck with the comic almost frame by frame for the first half hour — and was right to do it. It’s a tightly written work that translates seamlessly to the screen, and really, if Vaughn wanted to, he could have done the whole movie like that, translated literally panel by panel, and still had a great work on his hands. But it is precisely where he veers from the storyline that he does his best work.

So how was the movie on its own? Fucking awesome. Thanks to recent movies that push the boundaries of off-beat comedy to new heights (“Pineapple Express” and “Superbad” are more kin to this movie than “X-Men”), this movie had the freedom to actually present the most accurate picture not only of the world of “Kick-Ass,” but also of the one we live in now. Because of this, “Kick-Ass” turned out not to be a superhero movie, a comedy or an action flick — but an amazing mix of all of the above (plus some indie overtones). And because of that, it was all the more believable. At almost no point are you asked to accept a bizarre fantasy world in which superheroes are accepted or treated as normal, but instead you find yourself giggling at the film’s scuba tights all the way through because, damn, even if you found yourself in that situation, you know every glance in the mirror would be a strange one.

This is the foundation of the story: How in the world, after all of these superhero comics and movies, is it possible that not even one person has suited up and taken to the streets to fight crime? It really does seem strange to me that this hasn’t happened yet (except in the case of Anglegrinder Man who lives in the U.K. and has taken it upon himself to grind the boots off of any car he finds with one). “Kick-Ass,” more than “Watchmen,” which, as tradition states, is a serious look at what the world would be like if superheroes were real people with real problems, shows us what it would really be like if you, the average chud, decided to suit up and prowl the streets. It maintains its amazingly realistic world through loads of lost fights and Judd Apatow-style humor, but it pulls no punches when it comes to the bloody action scenes.

This movie is like the anarchist cookbook for would-be superheroes: It never forgets the constant absurdity of the idea, but pushes forward anyway to show us no matter how ridiculous it seems, the strangest thing of all is that no one has done it yet.