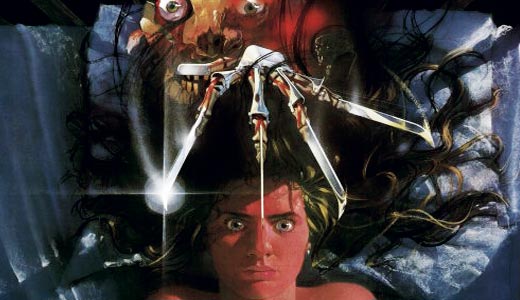 We’re all brought up to believe in our dreams — canvases on which we write our own stories, plan our own futures. But what happens when what we believe in becomes something insidious? Teen life is already a minefield long before you introduce a razor-gloved boogeyman. Abuse, drug addiction, delinquency, pregnancy, eating disorders, rage, bullying, sexual confusion, prescription overload, suicidal thoughts, parental anxiety, alcoholism … there is no teen issue that wasn’t addressed in a “Nightmare on Elm Street” film.

Even in its weakest sequels, the series never engendered the contempt for its characters so many other slashers did — for most, the focus was on the body count. But the “Elm Street” films were much more concerned with the setpiece — unique representations of the dream world, using the latest effects to craft a dark, shifting uncertainty right in the heart of contemporary teenage angst. Freddy was a slasher unbound by geography or behavior. As long as you had some sort of doubt in the ability of your parents to keep you safe, then that was his way in.

But what scares kids today? Can the anomie of today’s teens provide enough for the seeds of fear to grow? Does this next generation, the audience whose parents were teens and youth during the initial run of the films, really get genuinely frightened at movies anymore?

The original “Elm Street” series had a knack for making the real into the surreal, taking the very places where one would feel safe and stripping that security away. CGI, unfortunately, has made a surrealism of everything. Not only has the technology devalued reality (thank you very much, Forrest Gump), but it has devalued fantasy as well. Anything is visually possible, but nothing ever seems completely real anymore. Something that exists and was photographed has a weight to it that no computer can equal, and given today’s audiences are firmly entrenched in the digital, it seems that weight has been completely abandoned as an aesthetic goal.

This is tragic, because in Wes Craven’s hands, the original “Elm Street” was a game-changer in American horror that has yet to be topped. Always a master of deeply primal scenarios (“Last House on the Left,” “The Hills Have Eyes”), Craven served up a Greek tragedy in McMartin-era suburbia. Enter Fred Krueger, child murderer, freed from jail on a technicality and burned alive by the parents of his would-be victims. Somehow he returns through the dreams of their children to make abattoirs of the home, the hospital, the school, the police station.

There is no place safe from Freddy Krueger, as proved by 19 years worth of sequels. If you distill it all down to its most concentrated message, it’s that no one is safe. Even now, having a child is the lazy screenwriter’s instant motivation for having characters do the most outlandish and impractical actions. And invariably, those outlandish and impractical actions are rewarded with a happy ending and a saves-the-day. So there’s a blind spot in contemporary media about family eerily reminiscent of the ’50s in its absolutism; you can depict addiction, betrayal, abuse and whatever edgy topic you’d like, but as long as everyone acts on behalf of embodying this family unit, everything will be OK. That’s the subtext of 90 percent of movies. And that’s the kind of perspective that leads to bars on windows,

gated communities or whatever else parents can do to exhale and believe their children are safe.

The one interesting idea in the weak-even-by-slasher-sequel-standards “Freddy vs. Jason” (2003) — where parents would collectively dope their children with the experimental dream drug Hypnocyl and hide them away from the outside world — is that they’d rather face up to the supernatural occurrences on Elm Street than their own responsibility in killing Krueger. Overmedication and isolation seem to be high-water currents in the issues that resonate with today’s teen audience.

Parents confronted monstrosity by committing a monstrous act, and like a severed head dropped in a lake, it ripples outward. Was it the violence that gave him a chance to emerge back into the land of the dreaming? Or was it the silence, the lie that such a man had ever existed? No, it’s doubt.

The doubt that children begin to understand when Mom and Dad can’t keep it up. When homes shatter and those ideals start becoming untenable. Doubt is the crack that brings down the house. Throughout the “Elm Street” series, we get to know teens of all backgrounds and circumstances — rich kids and homeless kids, mental cases and honor students, all of whom must learn to rely on themselves or die.

But a funny thing happened to culture. Freddy became a superstar. He was the first slasher embraced by the culture of mass marketing. Television shows, CDs, guest turns on hip-hop records, appearances on MTV … you can’t really say Freddy was co-opted by the media, but rather he adapted. “Elm Street” films became important events, soundtrack tie-ins were readied, and that genuine terror in the first two films began to change. Grotesque humor and hyper-exaggerated dream sequences became the norm.

Freddy was in a comic book, Freddy was in a video game, Freddy was in the TV, and the edge got worn down. Freddy Krueger can feed off of the limitless font of human imagination, but as consumer culture in the ’80s showed and as 1994’s “New Nightmare” confirmed, he can be bound by it as well. If you’d like to see a film way ahead of its own time, give “New Nightmare” another look. That film understands that stories have to evolve and breathe anew. It posited Freddy as just a temporary incarnation of a monstrous fear that has been with us since humanity first learned how to dream (both figuratively and literally), and it recognized that by telling the story around the fire (or multiplex, as the case may be), it bound that inchoate menace into something concrete.

That approach explains some of the dunderheaded moves of “Freddy’s Dead” (1991), and let’s hope it’ll also cover the “reimagining” coming to theaters this weekend. Ah, the inevitable remake. It’s just something we expect at this point. But there’s so much possibility with the way Craven has helped shape the character over the years, so many different ways to get at the heart of every family’s secret fissures, of every neighborhood’s dark histories. It’s difficult to sleep easy, not knowing how this new film is aiming to continue/reset/rework the story of Freddy Krueger. Trailers have been promising, with a great deal of visual style and vicious edge to the proceedings. But what happens if an “Elm Street” film doesn’t affect the youth of today? Wouldn’t that be the setup for something even more nightmarish? It seems we’ll just have to wait and see.