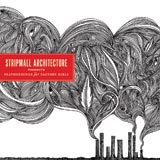 Rebecca and Ryan Coseboom apparently thought it was time to move on from their solid shoegaze act Halou, so they formed Stripmall Architecture first as a side project, but now it’s the main gig. Here the couple leads a quartet that tweaks Halou’s ambience and occasional experiments with interjections based on traditional guitar-and-drums rock. A quick debut disc (We Were Flying Kites) showed up last year, but now they’re more comfortable with who and what the Architecture is about. This new EP offers frequent reminders that Rebecca’s range of emotion and power beggars her peers (even on lyrics like “Dot … dot”). Opener “Radium Girls” plays to expectations — but then come the killer cuts. “Is This Science?” is a faux-dialogue in first person (complete with accusations and reconciliation) including intentionally overplayed cymbals and other button-pressing that adds up to a delightful frisson. “Pripyat” layers so many chipper and giddy instrumental phrases that it’s practically laughing at dream-pop clichés. Hopefully this complex outfit is just starting to hit its stride.