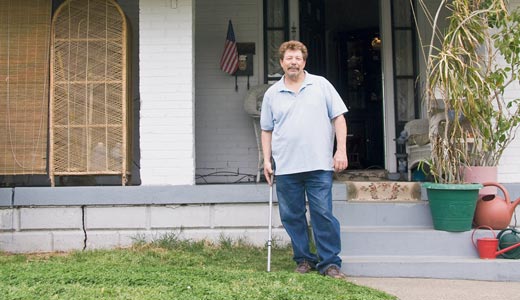 Garry Smith’s house is a front-row seat to the action at Churchill Downs on Derby Day. Nestled along Central Avenue, the view from his small front porch faces the main entrance of the track, where the 63-year-old Vietnam War veteran once worked as stable boy.

The living room is adorned with horse memorabilia and majestic posters of past Derby winners including Secretariat, Street Sense and Barbaro. When he was a rambunctious 16-year-old, Smith was working to become a jockey, a dream that ended during a practice run when his saddle slipped. The powerful thoroughbred drug the scrawny teenager around the track, leaving him battered and bruised. His jockeying dreams were over, but that didn’t spurn Smith’s love of horses or his bright-eyed euphoria about Louisville’s internationally recognized annual horserace.

“It’s the greatest city in the world, and it’s been wonderful living down here,” he says. “The excitement is tremendous as far as the activities, the people and the track. I’m all in for the Derby spirit every year.”

Last year, friends suggested Smith cash in on that Derby spirit given his proximity to the festivities. Living less than 100 yards from the front gate, he decided to try and rent his three-bedroom, one-bathroom house on Craigslist.

“I think $1,500 for the four days is fair, including the four parking spaces,” he says. “I’ve had a couple of calls, but nothing confirmed yet. Everyone kept saying it’s a great place to rent out. I thought I might give it a try.”

It’s long been a tradition for savvy residents around Churchill Downs to sell both prime parking and refreshments on their properties during the Oaks and Derby. It’s an entrepreneurial enthusiasm that has spread throughout the Metro region, with residents in Louisville suburbs and even as far as neighboring counties devising an array of means to make an honest buck — or several thousand — at Derbytime.

On Craigslist, for example, one five-bedroom house in the Locust Creek subdivision is going for $5,000 a day, despite being located a good 30 minutes from the track. Meanwhile, a historic mansion in Old Louisville dubbed “The Pink Palace” is on the rental market for $4,000 a day during Derby week.

Although Smith is offering up his prime Derby real estate for a modest price, he says if he doesn’t have any takers, it won’t dampen his Derby spirit. Instead, he’ll simply watch the madness unfold from his front stoop as usual. That said, Smith laments the fact that it seems harder for residents near the track profit these days, at least when it comes to selling wares.

Specifically, he points out that barricades are now set up along the streets during the event to keep people from crossing, meaning less business for do-it-yourself frontyard vendors. Added to that herding of the masses, many corporate sponsors have supplanted local merchants, and well-known block parties in south Louisville have either been shut down or faded from memory.

“No one has time to stop and look. And it really hurts and has taken away from the experience,” he says. “Now Churchill is selling a lot of merchandise, and it’s smothered out the small guy.”

West Louisville resident Kris Robinson has made a tradition of making some extra cash at Derbytime. Several years ago, the 32-year-old DJ began selling African-American themed T-shirts at a booth along West Broadway, a thoroughfare at one time overcome with thumping hip-hop music, sizzling barbecue grills and spruced-up automobiles during Derby. It was an undertaking that raked in about $1,500 over the weekend.

And although Robinson still sells his wares during the annual event, he says business isn’t as good since the city cracked down on “cruising” in the West End.

“We made so much more money back then,” Robinson says. “I’d love it if we had that type of situation again. Anybody could get a booth. It was perfect because it gave the West End an opportunity to showcase what it had to offer in our part of the city.”

In 2006, that grassroots enterprise came to an end when Mayor Jerry Abramson shut down Broadway cruising, an unofficial Derby party that flooded west Louisville neighborhoods with custom cars, foot traffic and quick cash for street vendors. Metro Police began strictly enforcing the city’s cruising ordinance, closed parks and even required residents to show city-issued passes to get to and from their homes during Derby weekend.

Last year, police eased those restrictions, but by then many entrepreneurs say they had moved on to other ventures.

For the past two years, Robinson has partnered with a friend — a former limousine driver — to provide shuttle service. The pair rents two cheap 16-passenger vans and transports visitors to and from the track during the weekend, charging $10 per person (a good deal when compared with some of the other shuttle and limo services being advertised online.)

“With the lack of recreational activities around here (West End) for people it’s either you’re going to do nothing, or you are going to go out and get some of this money that is coming into the city,” Robinson says. “We still have a strong entrepreneurial spirit… It’s Derby, and that means dollar signs.”