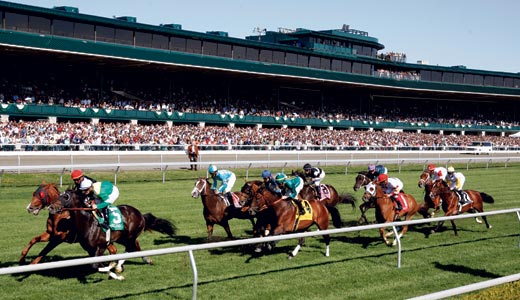 The major storyline for this Kentucky Derby was set Saturday in New York when Eskendereya romped to a nearly 10-length victory in the Wood Memorial, the horse’s final prep for the 136th Run for the Roses at Churchill Downs. The Blue Grass Stakes and Arkansas Derby remain to be run this Saturday, but nothing that happens in either of those races is likely to change the status of Eskendereya. He’ll be the one to beat on May 1.

The ease of Eskendereya’s victory was no surprise. The stylish chestnut had signaled his quality with a sharp score in Florida in February, and Saturday at Aqueduct Racecourse it was more of the same — with jockey John Velazquez looking over his shoulder to see if anyone was coming, and coasting his horse effortlessly to the wire when he saw nobody was. Eskendereya danced the final furlong of the 1 1/8-mile race in a handy :12 2/5 seconds, which is good for a horse just running for fun.

What was surprising, however, was trainer Todd Pletcher’s post-race acknowledgment that his previous 24 losing entrants in the Kentucky Derby had lacked the necessary stamina to succeed at the Derby’s 1¼-mile distance. Some of Pletcher’s past entrants have hailed from the same Storm Cat sire line as Eskendereya, a bloodline that is 0-for-forever in the Kentucky Derby. But one of Pletcher’s strongest attributes as a trainer is evaluating talent, and this horse, he says, is different.

“It’s amazing,” he added. “The farther he goes, the stronger he gets. He’s a horse that has natural stamina. It would be big to win the Derby. We’ll try to make that happen.”

Velazquez is certainly a believer.

“This is the kind of horse where you hold him together and let him go when you want to, and he responds the right way,” Velazquez told Thoroughbred Times writer Mike Curry. “Today, he was more kind the first part of the race. Once we got to the three-eighth’s pole (on the turn for home), he got on the bridle pretty strong, and when I gave him his head, he just went up and up and up from the horses. He was just galloping. It was a good feeling.”

“At the quarter pole, he put his ears straight up and took a deep breath,” said Talamo. “Then when I asked him, he exploded. He’s just an unbelievable horse.”

As it turned out, the winner’s story was overshadowed by a rough trip for favored Lookin at Lucky, who finished third. Many had projected Lucky as a rival for Eskendereya in a possible East-West Derby showdown — a time-honored storyline. But rider Garrett Gomez was forced to check Lookin at Lucky along the rail turning for home when, he said, he was shut off by a fading horse ridden by Victor Espinoza. Afterward, the riders reportedly got in a fistfight in the jocks’ room. The next day, Southern California experienced a strong earthquake recorded at 7.2 on the Richter Scale — but it was unclear whether the jocks’ room dust-up had set off the shake.

The most interesting performance of the Santa Anita Derby may have been by Setsuko, who lay last the first mile of the race, then roared down the stretch to finish second.

Setsuko is a horse with a chance. He’s a son of Pleasantly Perfect, who won the Breeders’ Cup Classic and Dubai World Cup — both at 1¼ miles — and a great-great-grandson of Ribot — and thus a part of one of the last stamina lines left in the breed. Setsuko is ridden by Rafael Bejarano and trained by Hall of Fame conditioner Dick Mandella.

Mandella had Mine That Bird in his barn briefly last fall. After the horse had been purchased in Canada, he was sent to Mandella in California for a try at the Breeders’ Cup Juvenile. Mine That Bird finished a dismal 12th, and was moved again, to New Mexico. Six months later, he scooted up the rail to win the Kentucky Derby at 50-1.

So when Setsuko showed potential earlier this spring, Mandella advised Daily Racing Form writer Steve Anderson not to take him or his horse too seriously, considering what had happened with Mine That Bird.

“One thing I would say,” laughed Mandella, “is I wouldn’t know a Derby horse if I had it in my hands. The jury is in on me.”

But it might still be out on the Kentucky Derby.