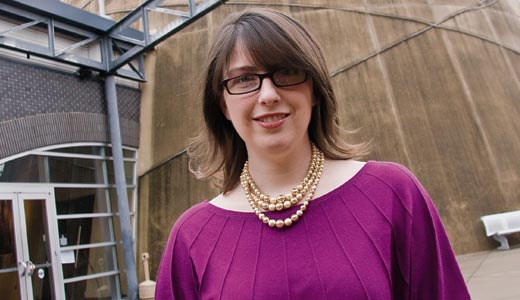 Ah, the perennial field trip. For students, the destination is forgettable. Moldy paintings of moldy people. Dinosaurs. Caves. Stalactite. Stalagmite. Whatever. For native boomers, one destination was U of L’s original Rauch Planetarium, long gone and replaced by the Gheens Science Hall and Rauch Planetarium. That passive experience is also gone, thanks to Rachel Connolly, who came here from New York’s Hayden Planetarium.

Everybody knows a Rachel Connolly — the spunky kid who ignored adults asking: “Waddaya wanna be when ya grow up?” She never didn’t want to be an astronomer, says her mother, who couldn’t keep Connolly away from Carl Sagan’s “Cosmos.” Not that an early self-chosen path leads to a myopic life. Consider: Connolly played jazz sax, created the first website for the band Boston, toured with Boston briefly, and once ended up sitting next to Led Zeppelin. She’s devoted to nature photography. Her husband is a video editor, and they’re progressing through a list of landmark films, having begun with an original Edison kinetoscope. The two live in the Highlands.

The Rose Center for Space Studies, part of Manhattan’s Museum of Natural History, is a building of fantastic imagination and vision — a huge sphere contained within a giant glass cube. And although it looks totally sci-fi, it is completely sci. The Hayden Planetarium occupies the top half, and when it opened in 2000, it featured cutting-edge virtual reality video and the beginnings of immersive learning.

Connolly encountered this technology when she started at Hayden in June 2001. The vision of education she uncovered as a high school teacher flourished there and led her to look for completely new ways of teaching with emerging technologies. This experience would bring her to Louisville to become the director of Gheens, and to pursue 21st century learning with a free hand. Like most interesting stories, Connolly’s journey to Hayden was one of happenstance twists.

Connolly was astronomer-bound early on. Nothing in Connolly’s life contradicts that memory, except maybe the pursuit of music, often a part of the scientific mind. During high school in Columbus, Ohio, Connolly was generally an A student, she says. “I took all the science I could and was in the honor society and all that jazz. But my focus in high school was band — marching, jazz, concert.”

Earning a scholarship to Denison College, she majored in physics and astronomy while playing sax and percussion in the pep band and jazz ensemble. As a senior, she considered joining the Navy’s nuclear propulsion program, but tossed that opportunity overboard because women weren’t allowed on submarines. After Denison, she attended Columbia as a NASA fellow in space education.

Recruited in 1996 to teach at top-rated Horace Mann High School in the Bronx, she arrived early for a year’s stint. But when the physics teacher walked, Connolly was suddenly teaching. She loved working without a net and stayed five years. Then she found the larger challenge beckoning — teaching a new subject in a more meaningful way.

“All of my teaching has been about connecting people to the world, the planet,” she says. Without a job lined up, she considered pursuing herbal healing, which Connolly saw as an applied science and “as a way to better know the planet.” Her husband pointedly suggested she find a job in her field. To prove astronomy jobs were scarce, she grabbed The Village Voice, turned to the classifieds, and there, incredibly, was a job for a presenter at Hayden Planetarium. Connolly applied, got the job and then a phone call — “You know, we couldn’t help noticing how absurdly overqualified you are.” She accepted the manager’s position.

She worked six years at Hayden with notables Neil deGrasse Tyson and Bill Nye (yes, the Science Guy). Her boss was Maritza MacDonald, the only person from popular science to be a member of the National Science Board’s Science, Technology, Engineering and Math (STEM) initiative. In 2003, student experiments Connolly had sponsored were destroyed when Space Shuttle Columbia broke apart during reentry.

When Connolly left Hayden, two coworkers also left, one to Los Angeles’ Griffith Observatory, the other to San Francisco’s Morrison Planetarium. The question, then: What brought Rachel Connolly a thousand miles to Louisville, to the delightfully funky Gheens? Answer: A bold step U of L had already taken.

In 2005, the Rauch Planetarium, originally part of the College of Arts and Sciences, was overseen by information and technology services, which deals with communications from copiers to video conferencing. After a review of the money-losing planetarium by U of L’s Board of Overseers, the facility was placed within the College of Education in 2006, a first for planetariums. Board members were also interested in incorporating the facility into the state- and federally-funded STEM initiative and using it as a developmental site for science teachers.

In spring 2007, a U of L College of Education group, interested in education research, toured Hayden. A member mentioned to Connolly that oversight of Rauch had been placed within the College of Education. Since this was a shift in philosophy not adopted elsewhere, Connolly responded, “Oh. Well, that’s brilliant!”

“Planetariums live in two places,” Connolly explains, “and neither of them are really easy for educational research, to answer the question of how do we teach with this facility. Either they’re in museums, where they’re basically revenue-generating theaters with ticket sales. And you can’t say, ‘Excuse me, I’d like you to not do the $2,000 show for one hour so I can bring in 20 kids for free research.’ The other option is a university setting where the planetarium is used for teaching astronomy.”

Connolly jumped at a planetarium freed of both traditional roles. “Sometimes you have to go to places like Louisville that are willing to test. I don’t think that could happen in the big areas that are set in their ways.”

A search committee brought Connolly to Louisville, eventually offering her the position of planetarium director, plus a faculty position, which allows her to pursue her Ph.D. in science education.

Although Connolly certainly is an astronomer, she is mostly an educator. At Hayden, she had the technology to begin her vision of educating with 3-D immersive experiences. At Gheens, her goal is to lead the way to education techniques possible only recently. These methods will cut across disciplines ranging from archaeology to cell biology, and of course astronomy. But don’t think Wii. “I’m not saying put someone in a virtual forest,” she says. “Go to the forest. I’m saying you’re never going to get inside a galaxy.”

Connolly’s brave new vision, and the goals of the College of Education, has met occasional resistance. But support is largely solid and enthusiastic at U of L.

As always with a quest both broad and deep, money is key. “Funding is, of course, the catalyst that will help us realize our new vision,” Connolly says. “We’ve enjoyed great support from the community, the university, our members and our donors. However, there’s a lot of potential to grow and innovate. So, you could say we are like a rocket on the launch pad ready for the countdown. We just need the fuel to take us to our destination.”