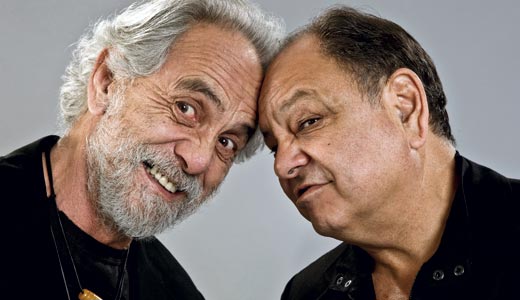 If ever there were two people who need no introduction … it’s Cheech & Chong. The comic duo who starred in “Up in Smoke,” “Cheech & Chong’s Next Movie” and “Still Smokin’” reunited last year for a sold-out tour, and Friday they’re bringing their Get it Legal Tour to the Louisville Palace. Now without further ado … here’s LEO’s interview with Cheech Marin and Tommy Chong.

LEO: Who were your comedy influences?

Cheech Marin: Oh god … anybody that got to be on “The Ed Sullivan Show”; I liked Red Skelton a lot, and I liked Danny Thomas a lot.

LEO: Tommy, how did you get from musician to comedian?

TC: I was with Motown for years — that was really my stepping stone into comedy. I was the only non-black guy in a black band. We never got paid much, but we laughed a lot.

LEO: With two people, how do you work out your creative differences?

LEO: How is your relationship different now compared with when you split?

CM: It’s older … it works well. After the last year we’ve had a whole tour to kinda smooth things out. But it’s going well now, we’re like, “OK, we’re here, we’re doin’ it, we wanna do it, we’re having fun doin’ it.” So anything that went on in the past will be water under the bridge, because we’re not gonna be like, “Alright I’m gonna go and show you what I can do!” We’ve already done that part.

LEO: When you two originally split in 1985, was it hard for you?

TC: For a little bit. For a couple of months, maybe a year … it was tough. It was tough, because I had to do a lot of things myself, and then that became the joy — the joy of not having a partner. I managed really well actually.

CM: Yeah. When I broke up with Tommy, I was going through a divorce at the time, too. I didn’t have any job on the horizon, and I hadn’t worked in a couple of years, and the house payment was coming due … so it was scary.

LEO: I know people have wanted a reunion for years, why was now the right time?

TC: I had come to the end of my stand-up career with my wife, and Cheech had sorta run out of options with the movies. It was time, because we both really needed each other again.

CM: We kinda realized that we’re closer to the end than we are to the beginning. We figured of all the things we could do together, what’s the thing we would least argue about … and that would be the stage show.

LEO: You are preparing to release a live DVD called “Hey, Watch This!” What was it about the show in San Antonio that made it the one to film?

TC: For a couple of reasons. No. 1, it was very historical — after not being together for 30 years, it was our first show, so it was nice to have it documented. We were only going to do that show one time, so that was another reason. And then San Antonio is still a part of Mexico, so that really helped as far as the audience went.

LEO: Are you doing different material now than what is on the DVD shot a year ago?

LEO: How does the new stuff hold up next to the old stuff?

CM: Probably better. Actually … there’s a lot of old stuff that was never performed live … ever. And we’re doing it on this tour. Ours is an improvisational act, so there’s always some element of improv in there, and it changes from night to night — it just keeps evolving. We don’t really notice, because we’re doing it every night; it keeps rolling inexorably forward.

LEO: Can fans expect classics like “Earache My Eye” or “Santa Claus and his Old Lady”?

TC: Uh … yeah, actually we made a concerted effort to include the classic bits in the show. Not only do we include them, but we give a little history before and after them.

LEO: Tommy, are you angry at all about being targeted for “selling paraphernalia” in 2004, which led to you serving a nine-month prison sentence?

TC: No … on the contrary. I was a willing participant in the whole play. I never had a mean moment the whole time. I never hated anybody. I took it as a gift. It was an experience that could only come that way … the way it did, ya’ know? I feel very honored (to be a martyr) — I’m in the same category as Martin Luther King Jr. and Nelson Mandela.

LEO: You have a film coming out called “Cheech & Chong’s Animated Movie.” Is this new stuff, or is it animated versions of the movies we’ve seen?

TC: It’s the records we cut back in the ’70s — Big Bambu, The Wedding Album, all the classic albums — we’ve put them to animation. I’m probably the biggest critic, but I laugh my ass off every time I see it.

CM: The coolest part, because I haven’t listened to the records in a long time, is how sophisticated they were. It’s like we constructed whole worlds there.

LEO: When the history book is written on Cheech & Chong, what will their legacy to be?

CM: That we became part of people’s vocabulary … their comic vocabulary. And they shared our material among their friends throughout their lives.

TC: They were some funny motherfuckers.