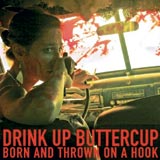 Much of Drink Up Buttercup’s debut doesn’t sound composed so much as thrown together from disparate scraps by an ADD-addled 10-year-old. The songs jerk between tempos and time signatures as often as verses shift to choruses, and the band makes no effort to make the proceedings run smoothly, letting overdriven organs, knee-slapping rhythms, shouted choruses and faux-British accents bleed into a furious, garagey cacophony. The band best succeeds by letting their influences float un-self-consciously to the surface, as on the Kinks-ish “Young Ladies,” or the standout “Heavy Hand,” which opens with a hilarious fake-out of the Beastie Boys’ “Gratitude” before shifting gloriously into “Interstellar Overdrive” territory. The album is a dizzying, disjointed listen, and the songs possibly could’ve been more palatable divided into Wire-style bite-size fragments. But when it clicks, the record gives ample evidence of Drink Up Buttercup’s potential.