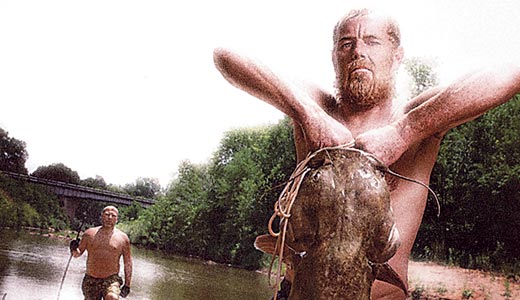 It’s difficult to fictionalize rural Kentucky without fondling the sensationalized fare of white power, drug addiction and crime, much in the way FX’s new series “Justified” cheaply boosts ratings with bazooka-toting hillbilly-Arians and crystal-meth prom queens. But that’s precisely what’s so unique about Alex Taylor and his first collection of short stories, “The Name of the Nearest River.” Not only does Taylor aptly conjure the dilapidated menace and ruin that poxes many of western Kentucky’s rural communities, he offers privileged glimpses into the plights of its inhabitants.

“We’ve been depressed now for the past hundred years,” Taylor jokes as he discusses the setting of “The Coal Thief,” which takes place in the wake of the Great Depression and WWII, and it’s precisely this wry humor and grace that incarnates what many so-called “Southern” writers can only posture.

Whittled out of the same dirt and briar many of his characters inhabit, Taylor comes from Rosine, Ky.
— a small town planted off Highway 62 in Ohio County. If you haven’t heard of it, it’s because of its scant population of around 50; and if you have, it’s because Bill Monroe — the father of bluegrass — is buried there. Aside from college, Taylor spent the majority of his life in Rosine and does not feel apart from its quaintness and customs. Deeply spiritual, but not adhering to any specific church, Taylor — like Johnny Cash — touts the Gospel’s power to humble and redeem.

Taylor’s diction — both on the page and in person — effuses with dignity and precision. When he speaks, you feel the weight afforded every word, and each declaration emanates a perennial wisdom well beyond his 28 years. Taylor studied as an undergrad at Western Kentucky University before receiving his MFA from Ole Miss in 2008. In Oxford, Miss., Taylor studied under the likes of Barry Hannah (who died on March 1) and Tom Franklin. Taylor, who has considered himself a writer his whole life, was published in The Yalobusha Review when he was 22.

“These two men would have been godlike heroes in a former era. Now they’re pawns to a man riding a machine, which itself is a symbol of wealth and privilege,” Taylor explains of “Penitents Upon the Rocks.” The story concerns a pair of brothers who stop to noodle a catfish worthy enough to honor their aunt’s funeral. Submerged among the murky depths of a collapsed onramp, one of the brothers finally snags a behemoth, only to see it harpooned for sport by an affluent vacationer on a jet ski.

When answering whether he’s ever noodled before, Taylor laughs: “I’m not that insane — yet.” The holes in the muddy banks noodlers prod with bare hands often harbor hazards worse than catfish — moccasins and snapping turtles have supped upon their share of fingers and thumbs. Still, it’s by this mortal danger that Taylor imagines noodlers to “inhabit a realm we mere earth-walkers can only aspire.”

As a child, Taylor rooted for the villains. “In ‘Star Wars,’ I wanted the empire to win,” Taylor says. “They had the cooler costumes and the more interesting characters.” For Taylor, it’s a flaw of our culture that we prefer stories to end well. It’s funny to note that — as a 9-year-old — Taylor titled his first literary creation “Bad-Guy Magazine.” But it’s also this fundamental capacity to comprehend malevolence that informs so many fascinating plotlines. For an entire week, Granville — the protagonist of “The Name of the Nearest River” — skims the Gasping River for the corpse of man, only to desecrate his remains with a Polaroid and a fiddle. Likewise, “A Courier Among Green Trees” tacks on another grisly episode to the saga of the real-life Harp Brothers, whose feats of gore terrorized the nation in the years following the Revolutionary War.

“No, I’m not a fan of relationships that go bad in the middle of the Kroger aisle,” says Taylor when addressing the subject matter of his collection. “What concerns me is how people make peace with the fact that they are mortal beings.”

The language of “The Name of the Nearest River” thrives with sweat and skin and gleams with blood in the teeth. Hair — boofed and abundant — pollinates to unbridled lust with the grime of Kentucky’s sweltering summers; and, conversely, the imminent threat of violence slowly thaws our bitter bluegrass winters. Everywhere the earth bustles underfoot, and each narrative is distinctly aware of what traction it affords. Whether probing for a corpse in the murky breakers of the river or lost in a labyrinth of December trees, the setting never fails to correlate each character’s predicament.

Accordingly, the descriptions — as in “The Device Must Start at Zero” — often move from magnificently repugnant details, such as congealed hamburger grease on bare breasts, to a “… quiet when the sun is throwing its last light on the trees and you can’t think of anything but your woman. This is what makes men hone their knives. This is why guns were invented.”

The men and women of Taylor’s collection come together not so much out of the nobility of love, but by the juggernaut of their frustrations. It’s not that they say yes, so much as they can’t say no. Sex often becomes the pestle in which each character hopes to pulverize their disappointments.

Perhaps the most captivating theme of Taylor’s collection lurks in the depiction of young men. The sunken onramps and weeded lots decorating these emaciated economies provide few jobs or venues in which these youths can apply the notions of masculinity instilled in them by their fathers and grandfathers. In many ways, the modern world has left them behind. Even the joy of the Friday night highway only leads to a floorboard of crushed beer cans and the search of headlights over barren gravel. The meteoric emblem for this dwindling into manhood streaks across “We Were Men and the Fire Made Us” when three adolescents gather on the banks to watch a blazing coal barge sink into the river:

It was a big fire. By the time we got there, most of the barge was cocooned in flame with the coal smoke walling up in fat black kinks. Paint melting off the hull hissed in the water. There were a few fire-boats out there jetting the flames with hoses but they might as well have tried to piss it out for all the good they were doing. I wanted to see the barge sink. We all did. We didn’t have to say so. It was how we were. We wanted to see something go under and see the fire keep going underwater, lighting up the green deeps while it went down, down, on down like a candle drifting through a darkened house.

You can pick up “The Name of the Nearest River” at Carmichael’s Bookstore or purchase it online at www.sarabandebooks.org. Taylor will give a reading on Wednesday, May 12, at Carmichael’s on Frankfort Avenue. Call 458-4028 for details.