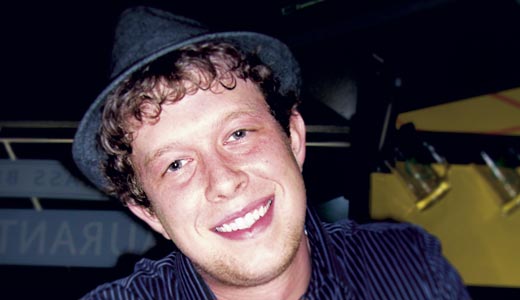 It’s a typical Friday night, and you’re standing at the bar wondering what path to take. If you choose a pint of Bass, you know pretty much how the next few hours will play out — fun, laid-back, not too crazy. Beer will rule the evening hours. But if you’re feeling a little mischief creeping under your skin, you’re going to order that bourbon and diet and let the night take on its own adventure. Most drinkers are faced with these two options — beer night or liquor night? — and very few ever straddle the fence. We learned that lesson long ago. Joseph Riggs, however, has built himself a home on top of that fence and believes the merger of beer and liquor is a natural, beautiful thing.

When Robert Frost came upon his two paths, he chose the one less traveled. But what if he didn’t have to choose? What if he could take both paths simultaneously, thereby removing guesswork and consequence from his action? As a bartender at Bluegrass Brewing Company on Fourth Street, Riggs found himself faced with that choice daily. Recommend a decent bourbon, and you’re steering the customer away from the brewpub’s bread and butter. Recommend a pint of Nut Brown to a vodka drinker, and they’re gonna leave unloved and unsatisfied. And then it hit him — beertails.

Like a mad scientist, Riggs spent an afternoon at BBC concocting potions that integrated both beer and liquor. He needed recipes that didn’t mask the beer’s signature flavor, yet wasn’t overpowered by the bubbly either. After many hours in his lab, Riggs came out with six beertails he hoped would satisfy both the liquor drinker and the beer fan.

“The beertails were definitely inspired by the beers themselves,” he told me two weeks ago when I stopped by to investigate. “Our flavor profiles on each brew are so distinct that I could not possibly have thought of cocktails with beer, as opposed to beer-first cocktails.”

One such beertail is the Bourbon Barrel Ball, which merges Woodford Reserve bourbon, hazelnut liqueur and cream with BBC’s Bourbon Barrel Stout. The Woodford, Riggs said, was an easy complement to the stout, since the beer is aged in used Woodford barrels. “The secret to matching beer with liquor for me was to find balance between bitterness and sweetness, as well as manage texture,” Riggs said. “Also, I let the beer determine the creation of the beertail.”

The savvy Louisville drinker will notice something in common in all the beertails — Riggs uses only Brown-Forman products to keep it local, keep it in the family, so to speak. So far, the beertails have been selling fairly well, Riggs said. While some, like The Cheater, are perfect for this time of year, others, like the Portermint Patty Martini and the Banana Nut Brown Bread, are more soothing in colder months. The beertails are available at both BBC locations. And if you have an idea of your own, Riggs seems like the kind of guy who can make it happen.

Riggs has been at the BBC for only eight months but has bartended around town for more than five years. He said he’s always been more interested in creating drinks than just pouring and serving. In fact, Riggs won first place last week at the Taste of Derby’s Bloody Mary contest. And two weeks before that, he entered a one-off beertail in the Four Roses Mint Julep contest, a drink that blended Four Roses bourbon with a mint-ginger-basil simple syrup, topped with Raspberry Meade.

He definitely is no stranger to the bar scene, preferring to hunker down at a neighborhood dive like the Back Door with a Basil Hayden on the rocks. “The secret to a successful bar is to recognize regulars and make them feel like they are a part of a place,” Riggs said. “Stiff drinks don’t hurt either.”