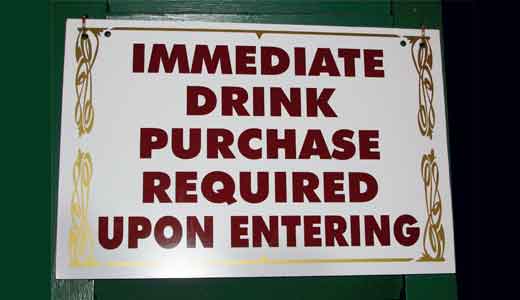 Every now and then, my soul is beckoned to a city that doesn’t sleep. A city where I roam the streets with the undead in search of my next kill, which is usually a 23-ounce plastic cup that has “Huge Ass Beer” stamped on the side. Or perhaps it’s a succulent hurricane from the house of Pat O’Brien that I seek to sink my teeth into. Whatever the force, New Orleans has a very real, very strong pull. Tired of spring’s flip-floppy weather, I headed south last week on an adventure that landed me in the middle of New Orleans’ French Quarter, hungry for solace, starving for a good time.

I convinced some unsuspecting coworkers to join me on my journey, which was a risky move. Even best friends can turn on you when confined in a small space for 10 hours, especially in the states of Alabama and Mississippi. While the three of us tend to gravitate toward different things (me: colorful, sparkly beads; them: local art), we had one task in common, and that was to blow off steam. I introduced them to the finer culture and cuisine of Bourbon Street, and they tolerated it … for a night.

But as we crossed Canal Street the next evening and into the Quarter, Artsy B proclaimed her distaste for the frat boy tourist traps and wanted to find something else. I shrugged my shoulders, procured myself a cocktail (drinking in the streets is legal!) and decided to become the follower for the night. I’ll admit to fearing the worst. I thought I would wind up antique shopping my day away, or worse, drinking cocktails at a place too fancy for my budget. But when Artsy T and Artsy B stumbled upon a dive bar situated in a dark alley, my interest was piqued (and my beer was empty).

The sign read Pirate’s Alley Café and Olde Absinthe House, and apparently the place once served as a prison cell for pirates, back before they looked like Johnny Depp or sold crappy rum. A haggard wench was tending bar and grunted her way through a greeting. Pirate’s Punch was the house drink, so we forked over our money for two cups and one bourbon and soda (Artsy T doesn’t do red drinks). Feeling all eyes on us, we quickly found a corner booth and stowed away while we took in the scene.

Pirates, vampires and Confederate soldiers were scattered about, discussing the day’s politics. The pirates, in full regalia, were the friendliest of the bunch. Artsy B immediately struck up a conversation with a pirate and his wench while she smoked her cigarette. She came back in boasting a shell necklace and three jewels from the sea. I shook off my uneasiness and quizzed a vampire on his bathroom etiquette. I guess he figured my blood was far from healthy, so he engaged me in friendly banter and even hit on Artsy T, who was completely unaware of his advances.

The moral of the story? Sometimes a night of no plans can lead to unexpected fun. Or don’t be afraid to venture off the beaten path, you just might find yourself a vampire.

• That’s part of being brave, sometimes you get bone

• You have an uncircumcised throat, tonsil girl

• U wldnt kno a julep frm a tulip

Send drunk texts to me, mates, at [email protected]. Arrrgh. Check out my daily reasons to drink at barbelle.leoweekly.com