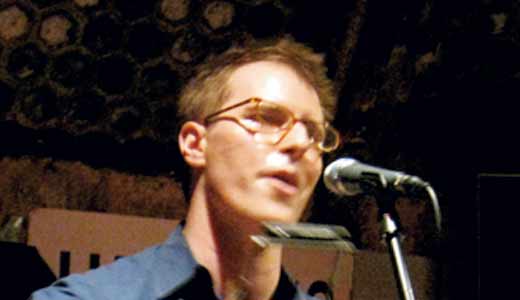 Dustin Edge demoed much of the material for his EP at a hostel in the Czech Republic.

If you think Rush Limbaugh is hard to understand, try reading Czech. That is Dustin Edge’s day job.

Edge, a St. X graduate, became an English translator after emigrating to the Czech Republic. A lifelong musician whose bands include Section 8 and later Cast Iron Filter, Edge’s material for By The Numbers took shape overseas. He played weekly at the Czech Inn, a basement space that hosted music and film shows, and demoed at Skutecnost, a youth hostel. In 2008, Edge’s wife was accepted into a master’s program at New York University.

On returning to the United States, Edge kept both his job and the music going, tracking Numbers at The Loft, a gallery in Williamsburg, Brooklyn with studio musicians, and playing solo acoustic shows around New York.

Numbers rolls out with a futuristic bent. “It’s an attempt by me to sort of reconcile and balance this notion of numerical order with the basic aspects of life from the day to day — how I respond to music and how it fits into my life,” he says. “I didn’t title anything when I was first working on it. I just had numbers. I wrote more and more words that kept referring to different mathematical things — organization vs. trying to get things done in life. It’s very important to our existence to have this balance between work and play.”

As for a hometown show, Edge is playing that by ear. By The Numbers is now available on iTunes and other digital retailers. Check out myspace.com/dustinedge.