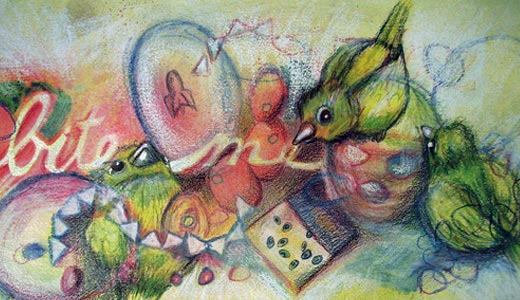 "Bite Me" by Teresa Koester Mills

If you’re in search of emerging artists or art in Louisville, look no further than Spot 5 gallery. Located in the back of the Clifton Art Supply store, Spot 5 aims to be what co-owner Jeff Freeman calls “the off, off Broadway” of galleries. “We wanted to have the kind of place where new artists could gain some viewership and more established artists could be seen while they tried out new ideas.”

Spot 5’s current show — “Word!: Visual Art Influenced by the Written Word” — seems to accomplish the goal set by Freeman and his co-owner, wife Laurie Blayney. “During the Frankfort Avenue Fat Friday Trolley Hop, we had a lot of people from larger galleries coming in to see what we had,” says Freeman.

“Word!” is the perfect incarnation of the gallery’s intentions. A small show, it features less than 10 artists, all who responded to an open call for work. As is to be expected in an off-Broadway production, there are various levels of expertise and sophistication exhibited by the contributors. Notable selections include the charming “Nigel,” a pet portrait by Jill Morgan, and the precious composition inspired by the phrase “Bite me,” featuring bumbling yellow chicks, by Theresa Koester Mills.

Owner Blayney’s painting “Billboard” is a mysterious and well-executed meditation on the ambiguous surface of a neglected billboard. The show is juried by Blayney and local artist Alice Stone, who also teaches at the attached studio. The gallery will announce a “viewers’ choice” selection at the close of the show, which visitors can vote on while they check out the work.

“We just wanted to be a venue that could be a launch pad for local artists,” says Freeman, petting his two large Labrador retrievers (who contribute greatly to the gallery’s laid-back atmosphere with their unapologetic loafing). Blayney darts quickly in and out of the gallery, teaching an art class for middle-schoolers in the back of the building. It is clear the couple is dedicated to supporting and cultivating emerging artists of all ages through their art supply business, the Spot 5 gallery endeavor and their teaching studio. As a result, Spot 5 can best be described as an unassuming artistic destination waiting to be discovered.

After “Word!” wraps up on April 18, Spot 5 will premiere its collaboration with the Louisville Cartoonists Society opening April 23. During that F.A.T. Friday opening soiree, Spot 5 also will host a meet and greet with Democratic mayoral candidate Greg Fischer (whose bravery I must applaud, as generally, politicians try to avoid cartoonists). Be sure and make Spot 5 a stop on your next trolley hop.