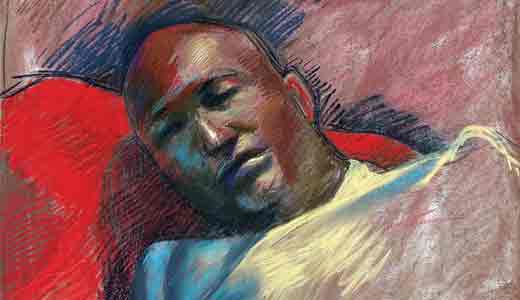 Daniel Pfalzgraf had a good idea (I’m sure he’s had plenty, but we’re only going to talk about this one): a portrait exhibition with local “all-star” artists. That’s a fairly ambitious idea for a novice curator.

From that seed, “LoCAL Portraits” was born. The “LoCAL” of the title means Louisville Contemporary Art Lounge, Pfalzgraf’s curatorial and hoped-for gallery name.

As far as the “all-star” artists, well, he wasn’t kidding. He’s got Ed Hamilton, Julius Friedman and Gaela Erwin, to name a powerhouse handful. Some of the 17 artists invited are well known for their portraiture, like Shayne Hull and Sarah Lyon. Others, such as Brad White and Matt Weir, are new to the game. Stephen Irwin was the first artist to agree to be in the exhibition.

“For my first major soirée in the curating arena in Louisville, I wanted to make a big splash with a memorable event,” Pfalzgraf says. “Getting this group of artists all together at one time has truly been something bigger than I could have ever imagined. I just figured if I was lucky, a quarter or, at best, half the artists I asked would agree … Never in a million years did I actually expect to get all the artists I asked to agree to show. Only one artist I asked said he wouldn’t be able to show.”

Pfalzgraf has been thinking about curating an exhibition for a while as one component of his future plans to run or to own a gallery. Serendipity happened when he met South African artist Emil Walton. After moving to Louisville more than three years ago, Walton decided to open a gallery to showcase local artists. With one previous exhibition under its belt and limited hours, ART227 is that new gallery. It’s usually only open on Fridays and Saturdays from 6-9 p.m. and by appointment, but Walton plans to have the gallery open more during the run of this show.

Pfalzgraf was in ART227’s first show. Walton mentioned to Pfalzgraf he was looking for exhibition ideas. “A light went off, and I seized the opportunity to put together an exhibition like I have been wanting to do for all this time,” he says.

Why portraits? “Portraits have the unique ability to reflect ourselves and those around us more intimately than any other form of visual art,” he explains. “It’s a very classic genre of visual art, yet in a contemporary setting, it’s still broad enough to be open to endless interpretations.”

And the show’s got plenty of interpretations. Martin Rollins, best known for his cityscapes and landscapes in oil pastels, is included with “Orpheus.” Hull, a painter of faces, is in more familiar territory. Yet in “Assistant Office Manager,” he obliterates what we expect to see.

“Self-Portrait as St. Peter Martyr,” from Erwin’s series of self-portraits as saints, portrays herself as the priest murdered by an axe so savagely aimed that it cut off the top of his (her) head.

In its public premiere, Raymond Graf gives us the soon-to-be-world-famous face of “Cassius Clay” from his pre-Muhammad Ali days.

The “LoCAL Portraits” reception is Friday, April 16, from 6-10 p.m. Pfalzgraf will be discussing this exhibition as a panel member of the Speed Art Museum’s “Artist Dialogues: Artist as Curator” on Sunday, April 25, at 3 p.m. The other artists/curators are Brad White and Bruce Linn.