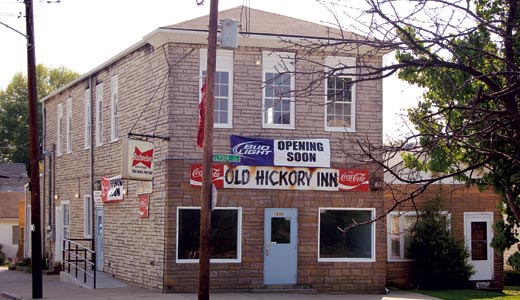 Not too long ago, things were looking pretty bleak for the Old Hickory Inn.

The longstanding Germantown-Schnitzelburg bar and restaurant — perhaps most famous for its open defiance of Louisville Metro’s 2007 smoking ban, and whose operation in some form or another dates back to the early 1900s — was consumed by a freak fire in February 2009 caused, of all things, by a leaky gas meter and an errant lit cigarette. Renovation work continued through early 2010: The interior was cleaned and remodeled, a new roof was installed, and a recently added “Opening Soon” banner lead many in the neighborhood to anticipate a grand reopening of the landmark by early spring.

But just as Old Hickory’s luck seemed to be turning a corner, hard times struck again.

Sometime between March 12-15, an as-yet-unknown perpetrator(s) inflicted $25,000 worth of property damage on the struggling 1038 Lydia Street business: Locks were dismantled; holes were punched in the new drywall; new barstools were slashed open; the Freon line to the freezer was cut; and what appeared to be a fair amount of urine was discovered in the bar’s beer cooler. According to The Courier-Journal’s poorly worded online police blotter, several power tools were stolen as well.

The police report also mentions a tenant dispute between Ralph Stengel, a local chiropractor who owns the building in which Old Hickory has long-operated, and then-bar manager David Hoffmann. The report suggests Hoffmann changed the locks on his landlord for reasons not currently known, and was then evicted from his apartment above the bar on March 17, a few days after the business was burglarized.

“I saw my neighbor sitting in a lawn chair at the corner of Hickory and Lydia streets in her pajamas (facing) Old Hickory and staring intently. I looked over and saw a couple guys moving everything out of (the building).”

The neighbor alleges that Hoffmann was expected to contribute a hefty sum toward the post-fire renovation in addition to the monthly rent, which reportedly never came to fruition.

Dan McMahon is no stranger to gossip. By day, he’s the owner and operator of Danny Mac’s Pizza on Clarks Lane; but by night, he’s the chief administrator of the Germantown-Schitzelburg Facebook group. By virtue of this position, McMahon sits at the nexus of the neighborhood’s many eyes, ears and tongues, acting as a kind of medium through which all manner of correspondence flows.

“I was curious about the history of the neighborhood,” says McMahon, who was inspired to create the group in part because of his fascination with stories from his father’s youth.

“I thought a couple people might see (the Facebook group) and help me put some stories together,” he continues. “I had no idea it was gonna be like this. It seems like it has turned into a little tool for the neighborhood. You’ll get people who’ve lived three doors down from one another for 30 years and they’ll find out they went to grade school together way back when. But yeah, it’s definitely developed into a bulletin board kind of thing.”

McMahon’s 3,500 fellow Germantownians use the group to uncover historical mysteries of their nabe, shoot the shit about local youth baseball leagues and the weather, trade potato salad recipes and (most recently) track down missing pets. When news of the incident at Old Hickory was posted, the group responded in kind. McMahon offered his synthesis.

“From what I heard, (Hoffmann) was given some time to get it fixed up,” he says. “Landlords usually give you a couple months to get your stuff together, you know? I think (Stengel) was wanting (Hoffmann) to open up in February, but I don’t think he had enough money to supply the place yet, which meant he couldn’t open in order to make the money he needed. So he was putting (the opening) off and the landlord wanted money coming in. It all came down to money, it seems.”

Of course, the rumor-generating capacities of a neighborhood like Germantown are so great that any insinuations of guilt must be approached with caution: One theory suggests police discovered far worse bodily excretions than urine at the crime scene, whereas another tries to incorporate members of Stengel’s extended family into the drama. For all of the wanton theorizing, the fact that the area has experienced a rash of car burglaries in the past month alone shouldn’t be overlooked, either, as the guilty party could very well be a random criminal with no ulterior motive, other than being a vandal and thief.

Neither Stengel nor Hoffmann could be reached for comment, and the police investigation of the incident remains active and open.

Another neighbor describes the neighborhood sentiment as “very sad. I’ve known Dave Hoffmann for years, and I doubt if I’ll ever go in there again now that I know he’s not gonna be there.”

McMahon isn’t sure who did the deed, but it’s not for a lack of theories. Regardless of who did what to Old Hickory Inn, it’s not likely to matter much as the string of bad luck that has befallen the battered, burnt and beloved corner bar might have finally run its course.

According to new bar manager John Malone, Old Hickory is slated to officially reopen for the first time since the 2009 fire this Saturday — just in time for the annual Schnitzelburg Walk.

Malone says he took over the reigns of the establishment this month, and has fast-tracked the renovation, ensuring no signs of last month’s crimes remain: Gone are the punched-in walls, slashed bar stools and dismantled locks. In fact, the only strong aroma emanating from the bar’s shiny new interior is one of fresh paint.