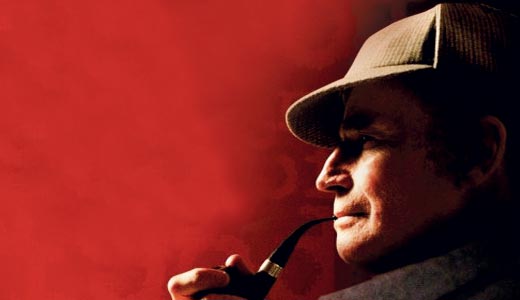 The Crucifer of Blood

Wildly entertaining, rock-’em-sock-’em reinvention of Doyle’s erudite sleuth with Robert Downey Jr. as Holmes and Jude Law (a guy we usually can’t stand) as Watson. We weren’t thrilled with director Guy Ritchie, but his trademark shallowness doesn’t interfere with the comedic elements or rollicking adventure set pieces. A great script, good casting — especially Rachel McAdams (who needs bigger boobs) as “The Woman” and Mark Strong as evil Lord Blackwood — special effects that range from very good to good enough and requisite plot twists make this a perfect popcorn movie — and, hopefully, first in a long franchise.

THE CRUCIFER OF BLOOD

Baker Street Irregulars recognize this title as a rare made-for-TV Sherlock Holmes outing starring … Charlton Heston? That’s right, old Bright Eyes himself played The Great Detective and did it without so much as a hint of an English accent! The plot is a mishmash of several Doyle adventures but doesn’t wander far from “The Sign of Four.” A surprisingly lighthearted affair produced by Heston’s son, Fraser — who played the infant Moses in dad’s “The Ten Commandments.” Really!

ALVIN & THE CHIPMUNKS: THE SQUEAKQUEL

Critics crapped all over this quickie live-action/CGI-animated follow-up, which is hard to understand — the first one wasn’t exactly great cinema. Alvin and the guys’ plans to be BMOC are dashed on their first day of school, and much of it comes from a pack of gyrating girl chipmunks! What’s not to like?

Newcomer Carey Mulligan is amazing in this unabashedly aw-gosh-romantic and intelligent coming-of-age tale. She plays a brilliant, if sheltered, 16-year-old named Jenny who has an affair with a man twice her age, the lucky-as-hell Peter Sarsgaard. Terrific. Doctor Who fans may recognize Mulligan as “Sally Sparrow” from the 2007 episode “Blink” (the one with the weeping angels).

First video release of this long-delayed minor project from the guys at Troma Studios — always a sign of quality. There have been a lot of crappy Sasquatchers over the years, but we’re happy to say this isn’t one of them. A far better-than-it-has-to-be B film with just the right balance of ham-handed direction, hilarious acting and truly suspenseful set pieces. Lots of big dumb fun. Enjoy.

I SELL THE DEAD

A really nice and oh-so-icky grave-robbing tale starring Dominic Monaghan and Ron Perlman. Monaghan, heading for the guillotine, recites his lament to Father Duffy (Perlman). Starting with a clean life, he’s soon corrupted by an evil soul, played by producer Larry Fessenden, until he’s literally wallowing amongst vampires, zombies and worse! Watch for Angus “Phantasm” Scrimm as the doctor amid the devils. A graphic novel is also available. Good stuff.

A pittance to pay for nine discs — 28 friggin’ hours — of the best comedy ever written! From “Who’s on first?” to the “Susquehanna Hat Company” sketch, 52 episodes of A&C’s groundbreaking TV show, all fully restored and remastered with loads of bonus goodies. What a time to be alive.

THE ANDROMEDA BREAK THROUGH

Our friends at Sinister Cinema recently uncovered this minor Limey gem from the ’60s, a mini-series sequel to “A For Andromeda.” A beautiful alien-created female (Susan Hampshire, taking over for Julie Christie) is kidnapped by an evil think-tank that is using a giant super-computer to secretly control the world. But their meddling has crippled the Earth’s nitrogen cycle, leading to global devastation. Simply wonderful Doctor Who-esque fare that you’ll only find at the best local vidstores or from www.sinistercinema.com. We love this stuff!

Germany of the 1970s was a fragile and newly minted democracy being torn apart by terrorism and political strife on a previously unimaginable scale. Inside, the children of the Nazi movement saw enemies at every door and reacted accordingly. This, then, is the tale of the most infamous of the bunch: a true saga of sex, torture and murder that threatened to infect the entire Western world. Very bloody and cruel with lots and lots of wonderful nudity.

A surrealistic study of composer Robert Schumann (1810-56). Schumann was a man who suffered from mental disorders for which medicine of the day had no cure. As a result, he spent his life writing music with two extreme voices, constantly in argument, making his compositions some of the most complex and disturbing ever written. He personified these two voices as daemons Florestan and Eusebius (Simon Callow, both), which are given free range to bicker within conductor Roger Norrington’s dreams in this arty vid.

THE TROUBLE WITH ROMANCE

A modern adult romantic anthology that varies in tone from Farrelly Brothers to the Brothers Grimm. While otherwise a solid, likeable bit of nonsense, one of the tales has drawn lots of unwanted attention due to what has come to be known as “the crapping scene.” Offensive? Yes. Hilarious? Hell yes! Worth a look.

Charles Darwin’s revolutionary idea that living things constantly change to survive a constantly changing world started mankind on the road to understanding his place in the universe. And as we’ve become comfortable with that place, we’ve opened our eyes to just how magical and wondrous it all can be. This NOVA special shows how much more we’ve learned since Charlie pointed out the path by returning to the Galapagos and asking all new questions that seem to challenge Darwin’s ideas. And it is that very challenge that defines it all as science. A welcome bit of real reality TV.