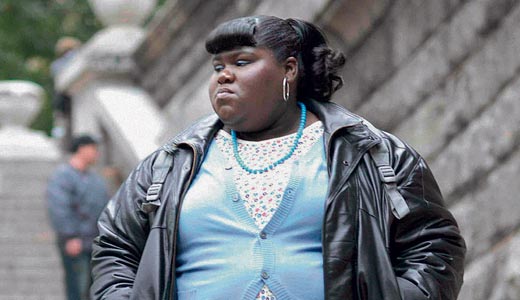 Forget what you’ve been told by the Republican-controlled press: Michael Moore loves the American way of life as much as any man alive, and he demonstrates it in this solid little doc about the corporatocracy that now rules our country — if not the world. In many ways, it’s an update on the work he started in “Roger and Me,” his breakout film. The goofy theatrics may wear a bit thin at times; but, when you’ve been trying to warn people about the wildfire as long as Moore has, you’re bound to get a little shrill. We liked it.

PRECIOUS: BASED ON THE NOVEL “PUSH” BY SAPPHIRE

The single most pretentious and insecure title ever put on a film? You betcha! But inside you’ll find a wrenching modern drama that seems in danger of coming off the rails at every turn. Somehow it manages to hang on, and it is this palpable, real-world tension that makes it so moving. Gabourey Sidibe plays the overweight, illiterate teen expecting her second child who looks for hope in an “alternative school” program after being abused by her mother and raped by her father.

EDGAR ALLAN POE’S THE PIT AND THE PENDULUM

“Saw”-inspired horror with artsy leanings that has pretty much nothing to do with Poe. Seven stupid college students volunteer for an experiment exploring new approaches to pain management. Hmmm. Apparently, it seems that death eases pain. Wonderfully bad.

A Discovery Channel treatise on just how insistent life can be by examining the extremes in the human condition. From America’s tallest man to the world’s tiniest dwarf to a 700-pound athlete to a pair of twins who share a single brain, this is just plain damn amazing.

A frantic-paced tale of two filmmakers rushing to get a man from jail to rehab — or he must go to prison for three years. Not the best thing we ever saw, but it co-stars sexy Olivia Wilde from “House.” What’s not to like?

The director of “The Cider House Rules” returns with this true tale of a professor (Richard Gere) who rescues a puppy, despite the objections of his wife (Joan Allen). Incredibly simple, heartwarming and thoroughly entertaining.

First Blu-Ray release of this legendary performance. Now re-edited back into its original playlist sequence, it contains absolutely every scrap of film shot of Hendrix on stage in August 1969, without interruption, in Dolby 5.1 stereo sound remixed by Jimi’s original studio guy, Eddie Kramer.

The worst movie we’ve ever seen. And not in a good way. ’Nuff said.

A lively, fun and colorful CGI-animated outing from Sony about an astronaut whose routine assignment to flag a dead planet goes sour. It seems the unexpected residents of the place see him as the harbinger of an alien invasion. The fun, of course, is in showing the comical side of our own lives through the toiling of the little green men and women of Planet 51. The “Alien”-inspired dog who pees molecular acid is pure genius. Lots of great voicework and a fun script. Recommended.

Regular readers of our column (support groups standing by) know that we love great old Westerns, and these are some of the best. Forget film titles, each is a minor gem and, best of all, each is introduced by Roy and Dale, often with a special guest. And each features their signature plots, songs and action. Six discs with Gabby Hayes, Pat Brady, Pinkie Lee, Gene Autry, Iron Eyes Cody, Pat Brady, Pat Buttram, Bullet and, of course, Trigger. A steal at $10 a disc, pardner!

It took the writer/director of the original BDS 10 years to get this sequel made, which is surprising considering its popularity. Norman Reedus and Sean Patrick Flanery, hiding in Ireland with crazed dad Billy Connolly, return to Boston for revenge after a beloved priest is killed. This sets up a reprise of the original’s bloody, violent crusade against sinister forces in the mob. Simply over-the-top excellent with Clifton Collins Jr. from “Star Trek,” Julie Benz from “Dexter,” Peter Fonda and Judd Nelson. Recommended.

TURN THE BEAT AROUND

A hokey MTV potboiler that, nonetheless, succeeds through sheer exuberance. Bodacious Romina D’Ugo is a dancer who talks wealthy David Giuntoli into backing her updated disco-era club. But once built, it is threatened by conflicts between the rich guy, her boyfriend, Adam T. Brooks and an ambitious vixen played by stunning Brooklyn Sudano (daughter of disco diva Donna Summer).

Interesting animated feature from Japan. In the near future, a female agent goes to the remains of Tokyo to investigate whether someone is developing banned robot technology. Filmed using a CGI/motion-capture technique, this is obviously a low-budget affair that steals from many better movies, but we kinda liked it.