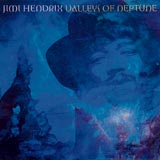 Jimi Hendrix, in his brief career, revolutionized guitar playing. Valleys of Neptune presents 62 minutes of previously unreleased studio tracks from Hendrix, ranging from 1969 remakes of “Fire” and “Stone Free” to deeper, more experimental cuts. The title track is mature Hendrix, flowing, while “Ships Passing Through the Night” finds him feeding his guitar into Leslie speakers to simulate an organ. Similarly, “Lullaby for the Summer” and “Crying Blue Rain” hint at the jazzy direction his music might have taken had he lived longer. His classic “Red House” is beautifully rendered here, despite a fade-out in the final verse. “Hear My Train A-Comin’,” a concert staple, shows he could conjure deep blues in the studio as well as onstage. His instrumental rendition of Cream’s “Sunshine of Your Love” changes tempo and quotes other songs. This addition to Hendrix’s official discography is valuable.