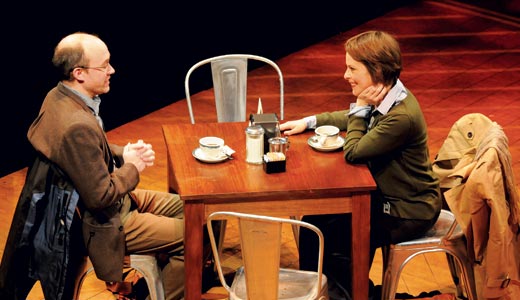 Phoenix
Part of the 34th Humana Festival of New American Plays. Continues through March 27 at Actors Theatre. Directed by Aaron Posner. For tickets or more info, call 584-1205 or visit www.actorstheatre.org.

The Humana Festival of New American Plays is always an amazing time in Louisville and in theater in general because of the remarkable work that emerges. The fourth play in this year’s festival is no exception. “Phoenix” brings Scott Organ to Actors Theatre for the first time, and hopefully he — and his work — will be back soon.

“Phoenix” is about a couple, for lack of a better word. They meet for coffee a number of times, discover heartbreaking and hilarious things about each other, have cathartic moments about what they expect out of life, and travel far to see one another … and this all unfolds before their first date.

A play with a cast of two takes a lot of energy to keep it going and keep it interesting. Thanks to Organ’s script and Suli Holum and Trey Lyford’s performances, this production does anything but lag. Organ’s play takes off from the moment the lights go up on Sue (Holum) and Bruce (Lyford) in a diner having coffee. Organ’s dialogue is witty and quick, and Holum and Lyford handle it with ease.

The actors bring everything they have to this production. They are both strong, yet subtle comic actors and have amazing chemistry together. One of the only negative aspects of the play is that we don’t get to learn more about the characters. Both Sue and Bruce have issues, but neither Holum nor Lyford simplify their characters to be merely a product of those issues. They successfully live up to the strength of the script and find a lot of depth to their characters.

The backbone of any good production is the script, and Organ’s dialogue is humorous without ever sounding forced. The first scene is hilarious but completely organic, and as the play progresses, the issues these characters have about life, death, work and commitment reveal themselves in sometimes funny and sometimes poignant ways. The play as a whole is extremely funny, even though the characters find themselves in serious situations. The script always stays genuine to the characters and what they’re going through, however, and never sacrifices the work for a joke.

The dialogue keeps the play going, but it’s also thanks to Aaron Posner’s direction that the pace of the play, with all the ups and downs, goes by without the sense of a heavy hand or someone beating a ruler to keep things in stride. The entire production is meticulous without ever feeling rigid. Michael B. Raiford’s set design and Jeff Nellis’ lights work together fluidly — the angles of the hardwood floor and the crisp light frames keep Posner’s play area distinct and clear.

“Phoenix” has a solid script and talented cast, resulting in an enjoyable play. Quite simply, this is one of those productions where everything clicks.