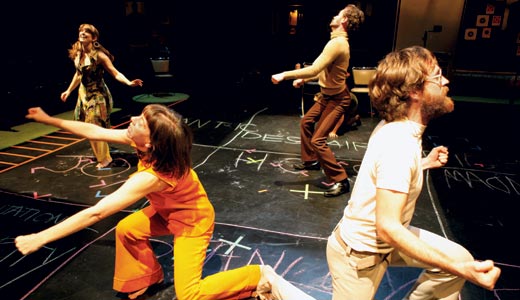 The Method Gun
Part of the 34th Humana Festival of New American Plays. Continues through March 28 at Actors Theatre. Directed by Shawn Sides. For tickets or more info, call 584-1205 or visit www.actorstheatre.org.

In “The Method Gun,” which opened last weekend at Actors Theatre as part of the Humana Festival, Rude Mechanicals, a theater collaborative based in Austin, accomplish the opposite feat: They create prismatic theatrical experience that functions like a set of mirrors cunningly arranged to reveal layer after layer after layer of stuff — and if you can’t quite figure how the layers are supposed to fit together … well, that’s all well and good. Long after the lights have come up, you’ll have plenty to think about.

To the extent that it has a plot, “The Method Gun,” written by Kirk Lynn, directed by Shawn Sides (also one of the players) and created by the troupe (Thomas Graves, Hannah Kenah, Lana Lesley, E. Jason Liebrecht), is a play about a play within a play. Rude Mechanicals, it seems, are fascinated by the story of Stella Burden, a ’70s-era proponent of radical theater whose approach was so rigorous that her planned adaptation of “A Streetcar Named Desire” — sans any of the leads — required a nine-year-long rehearsal schedule.

Long before the rehearsals were complete, like a god abandoning the world she’d set in motion, Burden departed for South America, leaving the company to find its way. Rude Mechanicals tell the tale of that orphaned company in scenes that leap across time, covering Burden’s audition process, her esoteric teaching methods, the troupe’s contentious rehearsals, snippets from their one and only performance, and its aftermath.

In doing so, they play themselves, play themselves playing members of the Stella Burden company, and play members of the Stella Burden company rehearsing, and then playing the minor characters in “Streetcar.” It’s an experiment that penetrates time and character — but more provocatively, it drills through sediments of emotion, wit and technique. At moments, it’s a bitter satire that pokes fun at rigor, craft and the obsessively trusting relationships that develop between charismatic teachers and their susceptible pupils; at other times, it’s almost cloyingly sentimental about those relationships.

And speaking of artifice — and craft in general — even at their most digressive (and there are surely nonessential elements in this play that exist only because someone in the company thought them amusing), Rude Mechanicals cultivate a stunning virtuosity that — like the other essential production in this year’s Humana Festival, “Fissures (lost and found)” — is essential viewing for anyone interested in theater.