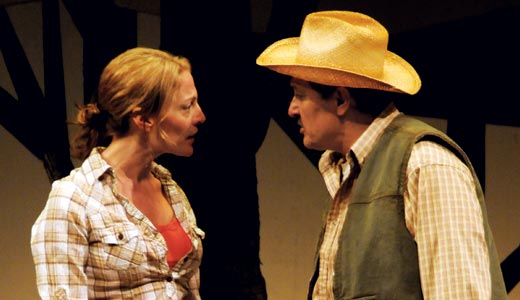 Ground
Part of the 34th Humana Festival of New American Plays. Continues through March 28 at Actors Theatre. Directed by Marc Masterson. For tickets or more info, call 584-1205 or visit www.actorstheatre.org.

A century ago, the Russian dramatist Anton Chekhov invented what might be called the iron law of dramatic foreshadowing. It goes something like this: If at the beginning of a play you introduce a chicken, by the end you damn well better serve up a batch of dumplings.

Lisa Dillman, whose “Ground,” directed by Marc Masterson, opened at Actors Theatre last week as part of the Humana Festival of New American plays, has taken that lesson perhaps too much to heart. The first hour or so of “Ground” feels like an interminable exercise in melodramatic portent — and the last hour smacks of squandered potential.

After the death of her father, Zelda (Jennifer Engstrom), a thirtysomething Anglo-American, returns home to the ancestral pecan farm, which is conveniently perched on the U.S.-Mexico border and has long served as a conduit for illegal immigrants. Zelda is a flaky, new-age type with a yen for meaning (and coffee), and a well-developed indifference to the folks around her (she keeps forgetting the boyfriend she hasn’t seen for 20 years is now married).

As Zelda makes the social circuit, we meet a collection of stock characters. The ex-boyfriend, Carl (Dale Rivera), is a Mexican-American border guard with night-vision goggles and a heart of gold — he’s not the bad guy, he’ll tell you; he’s the guy trying to make things better. Carl’s wife, Angie (Sandra Delgado), is a cynical, hard-working Mexican-American go-getter: She spends her time cutting hair, selling tamales and cleaning houses. She, too, has a heart of gold and wants to make things better — though she and Carl may not agree on what that means. Cooper Daniels (Rob Riley) is a silver-haired, land-grabbing Anglo-American vigilante with a heart of gold: He’s policing the border and building fences because the Feds won’t — but underneath the jingoist rhetoric, he’s a soft touch. Ines (Liza Fernandez) is a childlike, Mexican-American whose pregnancy is complicated by health problems and the fact that her husband is serving in Iraq. And Chuy (Ricardo Gutierrez) is the sturdy Mexican-American farmhand who taught Zelda’s father how to grow pecans — but who was somehow left out of the old man’s will. Those last two have hearts of gold, the one by virtue of her innocence, the other by virtue of his enormous knowledge and work ethic.

By the time we’ve met all the characters, we know that Zelda’s father was a good guy, that Carl is unpopular with the local Mexican-Americans, that Coop fills his thermos with French Roast, that Zelda needs to raise a bunch of money in a hurry if she’s to keep her land, that Ines’ pregnancy would go better if only her aunt could somehow be spirited across the border from Mexico, and that Chuy loves a fighting rooster named El Rey.

We also know that the technical crews — led by sound designer Matt Callahan, lighting designer Brian J. Lilienthal and scenic designer Scott Bradley — do fine work in service to a meager cause. Using mysterious whispers and howling coyotes, evocative twilight and foreboding spotlights, and an interlinking fence of pecans, they build a world more interesting than its inhabitants.

And though some might fault it as an unacceptable breach of etiquette, I have some sympathy with the honest response of the folks who were heard cackling on opening night when the foreshadowed chicken finally arrived on stage. Roosters seldom lay such eggs.