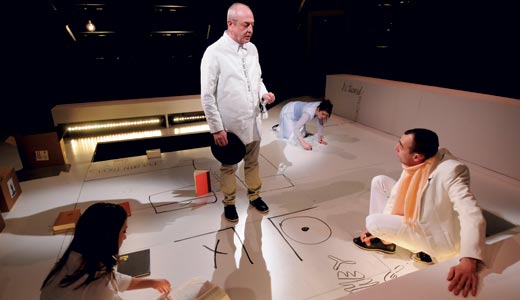 Fissures (lost and found)
Part of the 34th Humana Festival of New American Plays. Continues through March 28 at Actors Theatre. Directed by Dominique Serrand. For tickets or more info, call 584-1205 or visit www.actorstheatre.org.

Actors Theatre and The Playwrights’ Center commissioned this piece, which delves into that odd territory known as memory. The play asks the questions: Why is it that each time you remember the past, you forget and invent a little more of it? How does a place or a song conjure an experience that you didn’t even know you had lost? Mostly, it consists of soliloquies and scenes either about memory itself or remembering some person, place or thing. Though it’s difficult to describe, “Fissures” has some funny and interesting lines and moments because it delves into ideas that many times we don’t remember to think about (no pun intended), but it doesn’t really go beyond that. It’s like a plane that stays on the runway for so long that by the time it takes off, it doesn’t clear the trees.

The connection with the audience is the highlight of the play. The actors interact with the audience in compelling ways, particularly when Emily Gunyou Halaas asks for a program from an abiding audience member and rips it up to make a point. Later in the play, she returns to the audience member and the remaining piece of program in a poignant moment. Actually, all five actors in the production (Casey Greig, Megan Hill, Halaas, Nathan Keepers and Serrand) do a good job. They make the repetitive ideas, moments and lines worth watching. They hold onto the scenes without letting the language get the better of them — for the most part. But there are also times when they seem too charmed by the words they’re saying.

Serrand directed the piece, is one of the collaborative writers and enters late in the production — a surprise because he’s not listed as an actor in the program. There’s something comforting with his entrance, because finally the ideas connect. Finally there is a character with whom to connect. It’s no longer abstract, but personal. His entrance and character seem to be the reason the rest of the play happens, so there is a relief when he enters. Sadly, it’s quite brief.

Michael B. Raiford’s stark, white set creates a blank canvas for the action. It’s a nice metaphor for the mind, and slowly throughout the play the stage fills with memories — words, objects, people, songs.

“Fissures (lost and found)” is not plot oriented nor character oriented, but idea oriented. Some moments are touching, while others will make you think. Ironically, until the end, there are few moments you will remember.