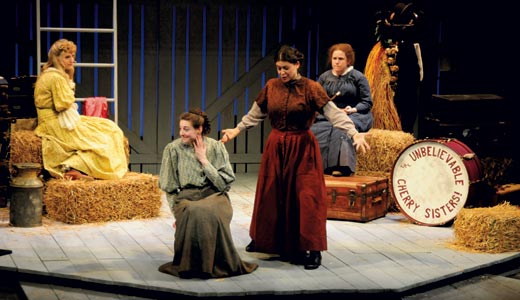 The Cherry Sisters Revisited
Part of the 34th Humana Festival of New American Plays. Continues through April 11 at Actors Theatre. Directed by Andrew Leynse. For tickets or more info, call 584-1205 or visit www.actorstheatre.org.

Oftentimes, truth is stranger than fiction. Actors Theatre’s final Humana Festival production, “The Cherry Sisters Revisited,” is based on a true story about five sisters from Iowa who dream of becoming Vaudeville stars. Through ups and downs, rough travels and lengthy rehearsals, they finally make it to the bright lights of Broadway and become a hit to sold-out crowds. What makes them a bit different from other Vaudeville acts, though, is that the Cherry Sisters have absolutely no talent — their dancing leaves much to be desired, their voices crack and wail, and the jokes barely survive the punchline.

The show opens beautifully with a tight spotlight on Effie Cherry speaking to the audience. The fourth wall is broken, and from there the play swirls between memory, reality and the ether. It’s a beautiful concept, and the story is generally endearing, but there’s just something missing.

The first act introduces the five sisters — Effie (Renata Friedman), Addie (Katie Kreisler), Lizzie (Kate Gersten), Ella (Cassie Beck) and Jessie (Donna Lynne Champlin). Friedman does well to connect and become a fully dimensional character, but she’s the only one given that chance with her solemn scenes with Pops (John Hickock) and soliloquies to the audience. The other sisters must attempt depth and genuine character development with little to go on since much of the play is the Vaudeville act itself.

Even in scenes where they’re “offstage,” when the characters are not performing, they remain stuck in their stock character roles — the idiot, the ditz, the pessimist and the jokester. Most of the scenes and moments have as much depth as a Vaudeville production, and nothing breaks from the hyper performance surface. So when the second act rolls around and the sisters’ optimism is replaced with reality, as they suffer on the road and slowly lose one another, the play falls flat. The moments that should be poignant are as touching as mundane song-and-dance routines.

Visually, however, it is a beautiful production. Lorraine Venberg’s costumes maneuver well with the many changes onstage and nicely capture the style of the play — particularly Pops’ costume with the empty liquor bottles tied to him, reminiscent of Jacob Marley’s chains. Scott Bradley’s set projects the footlights of a Vaudeville stage from a junk-filled dilapidated Iowa barn, housing accompanist Steven Malone in the corner.

The story of the Cherry Sisters is intriguing, funny and heartbreaking — they were unlikely heroines who achieved the impossible. But it’s established and accepted from the onset that they shouldn’t be taken seriously and have absolutely no talent. It’s that assumption by the production that never gives the audience a chance to believe in them, either.