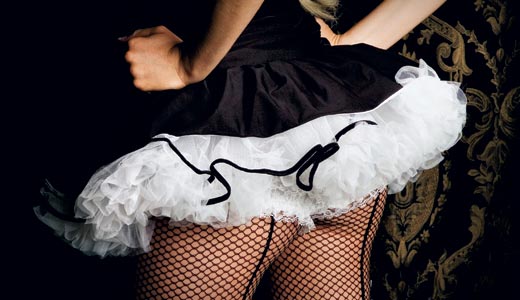 A funny thing happened while I was hovering over the toilet in a filthy public restroom the other day. Holding onto the TP dispenser to remain steady without actually coming into contact with the seat, I glanced to the right and was mesmerized by what I saw: There, scrawled on the metal stall, was a stick figure with what appeared to be tiny male genitalia.

Next to the drawing, in flowery cursive, the artist had written, “Beware! Cody Michaels has a tiny prick and herpes!”

I then looked left and my eyes were met with yet another artistic expression: a drawing of a kitten accompanied by the message, “My cat’s breath smells like cat food.”

In the 45 seconds it took me to pee, I managed to glean some useful information about a lad named Cody and had a good chuckle, all thanks to the under-appreciated art of bathroom graffiti.

That captivating potty break marked the beginning of my quest to uncover the most imaginative bathroom graffiti, a moniker I have abandoned in favor of the more refined term “commode creations.”

And so I embarked on a gallery hop of sorts, consisting mainly of local watering holes. Upon taking my first trip to the restroom, it seemed I had hit the jackpot. The dingy beige cinder-block canvas was covered in ink, a blend of obscene words, clever phrases and doodles of varying degrees of intricacy and proficiency. It was enough artwork to keep any thoughtful observer spellbound for hours. That said, such extended viewing is not recommended, unless of course you don’t mind being the recipient of angry tirades from drunken women waiting to relieve themselves.

A few highlights from that stop include a depiction of Rodin’s “The Thinker,” along with a thought bubble conveying the message, “My head hurts”; a drawing of Ms. PacMan gobbling a ghost, with the caption, “Die Blinky!”; and the inspirational assertion (in bubble letters), “We are all sisters of the Earth,” followed by the snippy retort, “Die hippie scum!!!”

On my next stop, I ventured into the men’s room to get an idea of how commode creations might differ based on the sex of the artist. My conclusion is that testosterone-driven artists are a bit — how shall I say? — grittier.

Take, for example, the crude drawing of three female figures (their femininity distinguishable only due to their exaggerated breasts) holding guitars. Underneath the trio are the words, “Dixie Chicks are French Whores!”

Simple yet bold, this piece undoubtedly makes a statement.

The vast array of penis interpretations was staggering, as was the sheer number and varied use of the word “fuck.” It was a sight to behold, indeed. Unfortunately, the smell in there left a bit to be desired.

Next time you venture into a public restroom, keep your mind and your eyes open — the writing on the stall just might be worth a second look. (But probably not.)