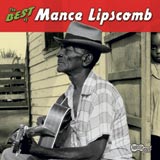 In 1960, blues enthusiast Chris Strachwitz and folklorist Mack McCormick went searching the Brazos River bottomlands in East Texas for players similar to Houston’s Lightning Hopkins. The man they found, sharecropper and songster Mance Lipscomb, was one of the most important vernacular music discoveries of the era. To call him a bluesman is to under-appreciate the massive range of his repertoire: not just blues, but reels, rags, minstrel songs, pop numbers, topical ballads and all manner of dance tunes, with which he had long entertained whites and blacks alike around Navasota, Texas. Mance went on to make seven albums for Arhoolie (launching the now-50-year-old label), appear at the Berkeley and Newport Folk Festivals, and be profiled in Les Blank’s film “A Well-Spent Life.” If you’re unfamiliar with the singular talent that was Lipscomb, this Best Of, culled from across his recorded output, provides your imperative introduction.