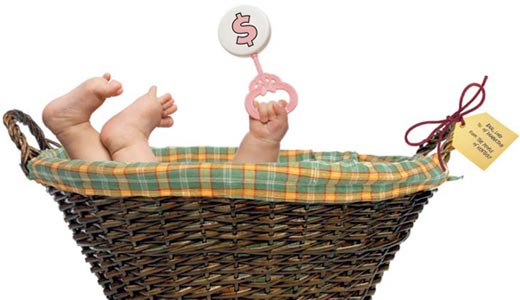 Marissa Burnside is nursing her newborn son, Joshua, on a bench in sunny Waterfront Park. The water is calm, the air gentle and warm. As the infant jockeys for a better suckling position, the mother looks away at something on the horizon. She starts to cry.

“I wish I could give him up,” she says, wiping her pained blue eyes with a free hand. “I wish it was just that easy, but it’s not, it’s just not. My son, he’s an innocent in all of this. I won’t let our governor offer up my Joshua as a ritual sacrifice to Baal, lord of damnation, just so he can build a couple of bridges.”

Burnside is one of hundreds of area parents opposed to the Kentuckiana bi-state bridges authority’s most recent financing plan, which requires any child-rich household in the Louisville metropolitan area to offer up a first-born as payment for the $4.1 billion public works project. The children will be handed over to Baal, “a master of torture and fiscal sense,” according to The Necronomicon.

Authority chairman Joe Prather announced the controversial move on Monday at an emergency meeting of the panel. Gathered before a throng of media and concerned citizens, Prather said the 14-member panel had “exhausted” all other options, and that feeding the souls of children to a trans-dimensional being was, in the end, the most cost-effective solution.

“The public doesn’t want to pay tolls,” says Prather, “so we won’t make them. They didn’t want us to build it out of Popsicle sticks, so we scrapped that, too. What would you have us do then? This thing has got to be paid for somehow, and soliciting the wrath of an ageless demon is the best way to go forward on this.”

Although controversial, the new plan isn’t without its merits. According to a study conducted by the Kentucky Indiana Regional Transportation Authority, each soul harvested would account for roughly $1.2 million toward the project’s overall cost. Given the economic realities thrust upon the commonwealth by a $1.4 billion budgetary shortfall, Prather might be right.

“It’ll take a lot of babies, a lot of souls,” he says. “But God willing, these bridges are finally on track to getting built.”

Louisville Mayor Jerry Abramson negotiated the financing plan, saying Baal is “very eager to help us solve our transportation concerns in every way possible.” The mayor met with Baal at the behest of Gov. Steve Beshear, who got the idea while smoking Thai stick and reading Aleister Crowley’s “The Book of Lies.”

“Nobody’s more gifted than my friend and running-mate Jerry when it comes to striking deals with nefarious, otherworldly entities,” says Beshear. “Nobody could’ve walked into that lair of fire and blood and walked out with a construction bond-purchase of that size. Nobody.”

In a brief interview conducted via ouija board, Baal told LEO Weekly he was delighted to be a part of the decades-long project, which he claims to have steered since its inception through then-U.S. Rep. Anne Northup, R-3rd.

“Oh, Anne and I go way back,” says the shape-shifting cacodemon. “People usually assume I’m all about devouring humanity’s life essence, but my commitment to this project comes from a deeper commitment to responsible traffic planning and sound infrastructure policy. Anne understood that, so in many ways I’m just coming home, so to speak.”

Baal says it’s not the first time he’s been summoned to help a cash-strapped community rebuild its infrastructure.

“Let’s see… the pyramids, Stonehenge, the streetscape of Washington, D.C. Hell,” he bellows, “I even did the White House — the original one, mind you, not the ‘cool one.’”

According to Abramson, Baal will require approximately half-a-million children to satisfy his appetite, and the coming preparations for his return will stimulate the local economy.

“Think of all of the jobs that will be created building both the bridges and the sacrificial altar. Think of the stimulating effect it will have on our retailers as people purchase handcrafted white togas from The Makery, or imported Swedish death metal albums from ear X-tacy. With Baal’s support, Louisville’s recession is officially over.”

As part of a broader educational component of the so-called “Baal Plan,” Jefferson County Public Schools has already begun disbursing tri-fold informational brochures in a bid to ease the worry of parents who are unsure about feeding their offspring to a flesh-eating multi-mouthed monster.

“The impending biblical bloodshed could not be happening at a better time,” says JCPS board member Debbie Wesslund. “Not having many students left to teach makes the budget cuts infinitely easier to deal with. And the students that are left behind should be more attentive, to say the least.”

The brochure also warns parents to refrain from painting their doors with animal blood, which would “only serve to increase Baal’s lust for carnage,” and would threaten the plan’s delicate structure.

For her part, mother Marissa Burnside isn’t fooled by what she claims is a propaganda effort designed to get Louisvillians acclimated to the idea of self-genocide. “I’m not an urban planner. I’m not a politician. I’m a parent,” she says. “I hate traffic as much as the next person, but how anyone could give up their child so they can get to work 10 minutes earlier is beyond me.”

However, a recent poll conducted by The Courier-Journal reveals Burnside and her ilk are in the minority. Of the 1,000 Kentuckiana residents surveyed, a solid 71 percent revealed they have no problem with the Baal Plan so long as it reduced commute times. And of those who responded positively, 43 percent said they wouldn’t mind offering up subsequent children if it meant the project could be completed faster.

“We understand that some people aren’t going to like this,” concludes Prather, who as bridges authority chairman will be personally performing the disemboweling ceremony. “But history looks kindly on those who do things even if they’re unpopular in the present. These bridges are too important to the region’s future to allow a few naysayers to ruin it for all of us.”

Until then, first-born Joshua will enjoy as much sunshine as time permits. When asked why she and other parents don’t simply move to another city, Burnside’s tear-stained face becomes sharp and focused.

“Because,” she says, her blue eyes flashing red, “I’m sick of idling on the Sherman Minton Bridge.”