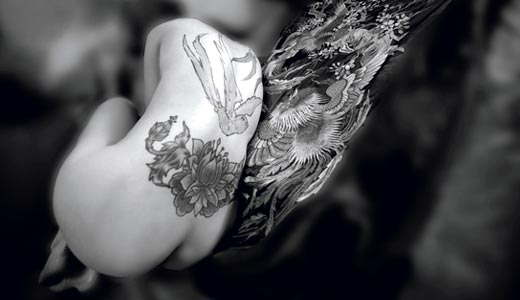 A few years after she set out her shingle at the crossroads of Southern literature and modern lite romance, Sarah Addison Allen has established her brand and style. Allen’s tales reliably dole out the charms of characters you can relate to — along with a few deftly played charms of the supernatural variety. Newest novel “The Girl Who Chased the Moon” brings in comfortable elements such as food that awakens both senses and spirit, and homecomings in eccentric families. You also get a grandfather who’s a giant, plus a bit of intergenerational mystery that unravels happily (with the help from a very special cake, naturally). Whether or not you’ve been along for the ride since her fine debut “Garden Spells,” consider visiting with North Carolinian author when she comes to town to read at Carmichael’s. —T.E. Lyons

Bon Vivant Savant introduces a new monthly art series at the Vernon Club tomorrow called F-N Art — Friendship and Art. The community-centered concept is open to multiple media, and all artists are invited to participate, professional and otherwise. Also, each event will have a theme, the kickoff being “Madness.” If an artist’s work in any way fits his or her interpretation of the word “madness” (and no, we’re not focusing on basketball here), it might just belong. A communal work will be created as part of the four-hour evening, and there will be performance art, along with live music by Tamara Dearing and Amanda Lucas. Hey, and there’s also a full bar. That could be considered art and a little bit of madness. —Kevin Gibson

You might recognize Theo Von from his stint as a regular competitor on MTV’s “Real World/Road Rules Challenge” series. If not … you might know him as a contestant on NBC’s “Last Comic Standing.” Then again, he might also be familiar to you as the winner of Comedy Central’s “Reality Bites Back.” But in recent years, Von hung up his reality show shoes and to focus on life as a traveling comic. “The reality TV thing was just something that happened in my life,” Von says. “It wasn’t like when I was 8 years old, people were like, ‘What do you wanna do?’ and I said, ‘I wanna be on an imaginary television show that doesn’t exist where they follow kids around and we win PlayStations and shit.’ And there isn’t a day that goes by that I don’t wish I was climbing a rope for $50,000 … but right now, I’m not. This is where I’m at.” You can see our full interview with Von at www.leoweekly.com. —Brent Owen

With a name like this, your curiosity should already be piqued. The jumbled syntax of the title gives this battle play the same kind of power that a B-movie out of Wild & Woolly’s “Psychotronic” section has. Just what the hell is a battle play? Well, this particular one, put on by the folks at the Alley Theatre, is directed by Todd Ziggler and follows the bloody journey of E-V, the very last female in a battle-filled, wounded universe. She makes her living by — what else — battling gargantuan galactic creatures in an underground fighting ring. It is here she eventually meets General DanH, the man responsible for the genocide of the human race. He offers to lead her to the last man on Earth, in his spaceship, aided by a gender-bending alien space pilot. How will a play handle this kind of subject matter without movie magic and special effects? Very well. —Pawl Schwartz

‘From Slavery To Freedom’

T.C. Carson, aka Kyle Barker from “Living Single,” will swing by the ’Ville this weekend, but not to look for a hot date spot to take Max or an open mic night where he can bust out “My Funny Valentine.” The two-time NAACP winner of the Best Male Leading Actor will host a theatrical production that presents snapshots of African-American history through music and poetry. “These are stories people need to know about our heritage,” says Tony Burton, artistic director of the Cotter Homes Theatre Group, which is presenting the show. “Our children must see hope and faith put into action.” Paying tribute to Phillis Wheatley, Harriet Tubman and Peter Durrett, Kentucky’s first black ordained minister, the performance includes early slave songs performed by Songs of the Spirit, a choir from Indianapolis, as well as contemporary gospel music, with spoken word performed by local poets Lenesha Sparkluv, Shenika Brown, Lance Newman and Truth B. Told. Carson will narrate the show and perform a few hymnals. —Jane Mattingly

John Coltrane, the groundbreaking and highly influential jazz saxophonist, devoted much of his time in the last years of his too-brief life to expressions of spirituality. Dick Sisto, a mainstay on the local jazz scene, brings together an all-star lineup of musicians to interpret this music. “The Christ Church Cathedral is an acoustically incredible place,” Sisto says. “We’re doing versions of material from A Love Supreme, including a reading by poet Mike B. I want to bring musicians together outside the confines of a nightclub or concert venue, where the purpose is to create excitement and go to this place where ’trane was trying to go, getting the ego out of the way and having a spiritual communion of music. We’re doing it without any amplification, which means the musicians really have to listen to one another more closely.” This is transcendent music, which has inspired countless people over the decades and should be especially relevant in the week that begins Passover. —Martin Z. Kasdan Jr.

Why not cut some of the bullshit steps out of touring from club to club? That was the brilliant idea worked out by singer-songwriter Israel Nash Gripka and trio The Fieros. Since it’s all about getting your music heard while earning enough to keep eating, they’ve started a tour where they bring an acoustic set to restaurants. They’ll play some good tunes and just want someone to pay for their meal. Upping the interest factor is that this pair of NYC-based acts doesn’t make for obvious (or smooth or dull) complements. The Fieros’ first release introduced tight garage-rockers with a knack for acknowledging both rockabilly and punk. Gripka, meanwhile, shows openhearted tenderness, but he’s not afraid to be bitter — or to lean toward a Creedence-like sound. Both acts trade in bracing honesty; go see if they give you an honest deal when they ask you to foot the bill at Lynn’s Paradise Café. (Check with WFPK for a later broadcast by Gripka.) —T.E. Lyons

As the last Monday of the month approaches, this means Sarabande will host another evening of poetry and music at 21c. Folks are invited to crush a complimentary cup of wine as they soak in the verbal affluence from the mouths of nationally recognized poets. March’s reading will feature the work of New Yorker Jason Koo and Louisville’s Constance Merritt after some guitar plucking from singer-songwriter Katy Rene.

Koo authored “Man on Extremely Small Island,” winner of the 2008 De Novo Poetry Prize. He teaches at NYU and Lehman College and serves as Poetry Editor of Low Rent. Merritt was born in Pine Bluff, Ark., in 1966, and was educated at the Arkansas School for the Blind in Little Rock. Winner of many prestigious prizes and fellowships, Merritt has penned three books of poems, most recently “Two Rooms.” —Dominic Russ

It usually takes awhile for artists to find their “voices.” For painter/educator Peter Van Howe, it was opening himself up to the emotions revealed in abstract expressionism. “About 10 years ago, I saw a large reproduction of Rothko’s ‘Orange and Tan,’” says Van Howe. “I couldn’t take my eyes off it. A friend lent me a copy of de Kooning’s biography. I was heartened by his continual struggle and search … opening myself up to the abstract expressionists opened me up to my students’ work. This collection of abstract/abstract expressionist art is connected completely and entirely to emotions — past and present. I am self-taught when it comes to applying my senses to the canvas. However, having said that, I don’t believe anything is created in a vacuum. Everything I do comes from somewhere.” —Jo Anne Triplett

The Nitty Gritty has been keeping hipsters, theme-partygoers and costume fashionistas vintage for 10 years now, and the beloved Barret Avenue store is throwing a 10-year anniversary bash next Saturday to celebrate. The event includes a group art show featuring pieces by artists who have shown their work at the store over the years — names like Scott Scarboro, Anessa Arehart, Suzanne Edds and Brad White. There will also be music by Kathleen Hoye and a performance by Le Petomane Theatre Ensemble.

“I have tried very hard to keep The Nitty Gritty a really fun, funky and friendly place to shop,” says owner Terri Burt. “I feel very honored to have survived this long and hope to continue. I owe my success to the community of people who have continued to embrace the store.” —Sara Havens

There’s a lot of buzz around town on Afro Punk, an event that’s planned here in September. “Afro Punk is a movement that encompasses ‘the other black experience,’” says Pam Newman, frontwoman for the group The Revenge of Ricky Williams. “People of color coming together to transcend stereotypes and rock the hell out! It will be an all-day, ass-kicking fest involving film, visual art, bands from all over the country, dancing and lots of awesomeness.”

Newman’s band is playing next Saturday for the event’s first fundraiser at the Alley Theater, along with Dan Hardin, Truth B. Told, Old Man and Cloak and Dagger. The Revenge of Ricky Williams’ first album, Past the Legal Limit, is seeing some airplay on WFPK. Listen for “Sweet Wolf Shirt,” it’s hard to miss. —Sara Havens

Two local artists, Russel Hulsey and Julius Friedman, have revealed their latest work at 21c. Hulsey’s “Verses Series: Msyitc Truhts” is dedicated, in part, to writers such as Henry Wadsworth Longfellow. Just so you know, Hulsey can spell. The title is an intentional misspelling of the statement, “The true artist helps the world by revealing mystic truths.”

“In these photographs, the image of the figure is so married into the other layers that it almost seems to emerge,” says Friedman of “Emergence.” “It is important for the viewer to bring their own experiences … and create their own story. It is not what one looks at, it is what one sees.”

Both artists will discuss their work at 5:30 p.m., Friedman on Friday, March 26, and Hulsey on Saturday, March 27. —Jo Anne Triplett

The lights go down in the Science Center’s large semi-round theater. The first thing you see in all its full IMAX glory is the word Hubble, flying at you like a super-hero moniker in a Hollywood blockbuster film. Within minutes, Leonardo DiCaprio (as narrator) is spewing absolute poetry — about quasars, new galaxies and exploding stars. This is the kind of film that will make you want to start training to be an astronaut when you grow up, before remembering you’re already an adult. These unique and before-unseen shots of Hubble repairs (floating above Earth, holding onto a spaceship’s robotic arm in zero gravity, and wielding a large drill, knowing that one rip in your suit means you lose all oxygen) will astound with shots of the amazing distance we humans have covered, but with the reminder that our reach far exceeds our grasp. —Pawl Schwartz