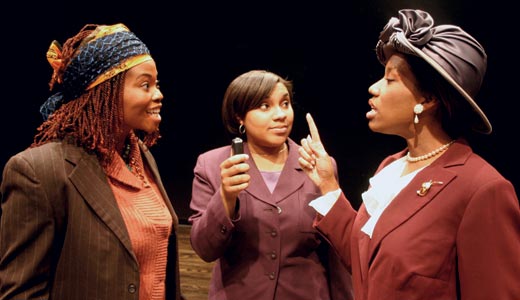 A Song for Coretta

‘A Song for Coretta’

Written by Pearl Cleage, “A Song for Coretta” takes place in 2006 at the memorial service in Atlanta for Coretta Scott King. The story focuses on the interactions of strangers waiting at the end of a long line to pay respects, and while they wait, they share their personal civil rights experiences. The all-female cast features actors of all ages. “These are powerful roles for women depicting different walks of life, just as King reached out to all kinds of people for civil rights,” says director and U of L theater prof Lundeana Thomas. “Whether on the streets marching or in jail, she embodied ‘This Little Light of Mine,’ her favorite gospel song, to all who faced injustice.” —Sara Havens

Stage One Children’s Theatre partners with Kosair Children’s Hospital to focus on childhood illness in “John Lennon & Me,” a play based on the popular book “Good-bye, Best Friend.” The play, set for Friday at the Bomhard Theater, focuses on Star, a teenage Beatles fan who is dying of cystic fibrosis and uses her imagination to confront her grim reality. She then forms an unlikely friendship with another patient that leads them to better understand each other and themselves. The play uses comedy to explore difficult subjects and the awkward growth period all young teens experience. The cast features professional actors, as well as several young actors from local schools, including Grace Theobald and Connor Holloway (YPAS), Cate Payne and Jahne Brown (Noe Middle), Shelbi Schooler (East Oldham Middle) and Jack Lindsey (St. Francis). Due to the subject matter, “John Lennon & Me” is recommended for children age 10 and older. —Kevin Gibson

It takes a lot of seeds, sweat and tears to keep Louisville clean, green and beautiful. In fact, thousands of Brightside volunteers have planted more than 2 million flowers over the years to keep this city polished. Brightside’s annual fundraiser, the Green Tie Bash, is in its fourth year and promises a kick-ass party, as always. The event features a silent auction, food, drinks and dancing, emcees Renee Murphy and Ben Davis, and music by DJ Reggie Regg. New this year are the Acorn Awards, sponsored by The Green Building, which will award one large corporation, one small business, one nonprofit and one individual for having green on the brain. —Sara Havens

Atmospheric. Sensual. Live. Words that fit nicely with the music of jazz trumpeter Chris Botti. The “All About Jazz” website calls him “a genre-of-one in the realm of contemporary jazz” — perhaps because he’s such a hit with mainstream audiences. Botti is a guy with a song to play. Often with others. He toured for four years with Sting, then played a year with Diana Krall. He can do Puccini with Italian tenor Andrea Bocelli, and come right back with “The Very Thought of You” with Paula Cole. Friday night Botti and band play Louisville at the Brown Theatre. Expect to hear the good songs. —Bill Doolittle

Well, at least they’re modest. Scott Shuffitt, Mary Yates and fellow LEOer Ron Jasin have come up with an alternative to “Kentucky Crafted: The Market” held this weekend at the Kentucky Expo Center.

“With so many awesome art markets out there, we figured we couldn’t be the most awesome and didn’t see any point in lying,” explains Yates. “The Second Most Awesome Art Market was an answer to the more traditional arts and crafts markets offered in Kentucky. This awesome Kentucky tradition has been taken and subverted by (us) to create an outside-the-box event packed with general awesomeness.” —Jo Anne Triplett

Written and directed by Juergen K. Tossman, “The Greatest Living Chapter” focuses on issues surrounding end-of-life through the eyes of one woman. Karen, who’s lived a charmed life, has adopted a child and taken care of her grandmother. Now she is confronted with a stark reality that will change her life and the lives of her family members forever. With the collaboration between Hosparus and Bunbury Theatre, as well as Tossman’s talents behind the production, “The Greatest Living Chapter” promises to be both poignant and insightful. Hosparus staff, volunteers and family members of former patients will facilitate a panel discussion following each performance. —Laura Morton

‘We Didn’t Mourn, We Organized’

To pay tribute to Louisville activist Anne Braden (who died March 6, 2006) and Women’s History Month, the Carl Braden Memorial Center is hosting this free event geared toward uniting the city’s activists and honoring the women who inspired Braden throughout her struggle in the justice movement. Mentors honored include Ella Baker, a leader in the Civil Rights movement, and Esther Cooper Axson, an activist of the ’30s and ’40s. The event includes live music by Carol J. Kraemer and Cynthia Fletcher, storytelling, crafts and a march followed by a potluck dinner at the Carl Braden Memorial Center (3208 W. Broadway). “We had to deal with the fact that our society was wrong and it had to be totally turned upside down,” Braden once said. “You can’t patch it up; racism isn’t some wart on the body.” —Sara Havens

A typical Those Darlins after-party ends like this: “Usually someone’s asleep in a chair,” says bassist Kelley Darlin. “And if they are, then they’ve got Sharpie all over their face. Things don’t get broken as often. Maybe we’re getting better at it, more professional.” These Murfreesboro, Tenn., cowpunks walk their boots all over the country this month. Kelley, Jessi and Nikki make guitar, bass and baritone uke sound like two nights in Bacchanal. Their new album, conceived in New York with producer Jeff Curtin (Vampire Weekend), bridges ’70s punk, Appalachian swagger and country sass. Darlins have toured with Dan Auerbach and Dr. Dog, and even played a house concert for Gary Calamar, who selects music for HBO’s “True Blood.” Will the ladies wear fangs? “I hope so,” says Kelley. “We’re vampires anyway.” The Ladybirds join. —Mat Herron

Kentucky sports legend Jock Sutherland and author Stuart Warner appear Sunday at Carmichael’s to sign and talk about Warner’s new book, “Jock: A Coach’s Story.” And who wouldn’t want to meet a guy who once stomped out on the court to protest what he viewed as a bad call — only to be met by a referee who said, “Jock, I’m going to give you a technical for every step it takes you to get back to your seat.” Whereupon Sutherland called over a couple of his players to carry him back to the bench.

Sutherland took three different high schools to Kentucky’s “Sweet Sixteen” basketball tourney, and won it all with Lexington Lafayette in 1979 — then launched into a new career as a popular color man with play-by-play announcer Van Vance on WHAS Radio broadcasts of U of L basketball. —Bill Doolittle

All right, Twi-hards, here they come. Monday night, 100 Monkeys are coming to Uncle Pleasant’s for an all-ages show. What does this have to do with your favorite vampire melodrama “Twilight,” you might ask? Jackson Rathbone (aka Jasper Cullen, aka the guy who plays the brother of the disheveled British dude I see all over the tabloids) is the lead singer of this particular band. With influences as varied as Daniel Johnston and David Bowie, and song titles like “Ugly Girl” and “Wasteland Too,” this show is guaranteed to be some sort of bliss for tween girls everywhere. The band is presently on tour in support of their debut full-length album, 2009’s Grape. This might be your only chance to catch 100 Monkeys for a while — Rathbone will report back for blood-sucking duty when he shoots the final film in the series, “Breaking Dawn,” later this year. —Brent Owen

Astronomically speaking, a blue giant is a massive star that’s left its main sequence and is incredibly bright — a suitable analogy for this Portland supergroup’s psych-country rock. The band has quickly earned a reputation for their milieu-blending music, penchant for constant collaboration (guests join for virtually every live performance), and lyrics gravitating toward moody narrative. “The songs … are just that: stories. Tall tales. Fiction as opposed to autobiography, I reckon,” says vocalist and songwriter Kevin Robinson. Including members of Viva Voce, The Decemberists, Swords and The Golden Bears, they released a critically acclaimed EP last year and will be putting out a proper full length soon. Fruit Bats headline. —Derek Knisely

Installation art can move you temporarily into another world, obviously one of the artist’s choosing. Jesse Gibbs, Scott Massey and Kathy McQuade-Olliges offer their interpretations on how humans are just waiting to be taken. Such things as society, politics and emotions manipulate our reality. In other words, it really is all about us! Massey, professor of sculpture at U of L, curated the exhibition. “The audience may choose to not just ponder,” he says, “but truly reflect upon the perspectives called into question within the works in this exhibit and in so doing alter their perspective and/or become aware of a dissimilar perspective.”

This show is definitely one to go into with your eyes wide open and your perceptions left at the door. —Jo Anne Triplett