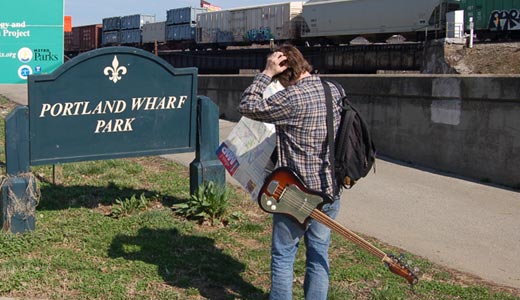 “These are not the asymmetrical haircuts we’re looking for,” singer Waldo Kraichek remarked to the rest of his band, peering out the window at a mullet that was far from ironic.

After 36 hours in a 15-passenger Econoline, the frontman for Omaha, Neb., indie darlings Matters of Taste looked more closely at the band’s tour itinerary and discovered the group was not in Portland, Ore., but Portland as in Louisville’s West End neighborhood.

He wasn’t the only one. San Diego proto-punks Gleeful turned ghastly when they pulled up alongside Matters of Taste’s van, equally dumbfounded by the absence of a stage.

Ditto for Complete Waste, who were on their first U.S. tour, having flown in from Rome. LEO Weekly was unable to translate the flood of expletives emanating in perfect Italian from their manager, but their American driver, Jay Nixtel, said their first clue wasn’t so much the absence of a stage or PA system — “They’re used to that back home” — it was the locked doors on the venue.

We’ll use the term venue loosely.

Somehow during the normal flurry of e-mails sent from booking agent to tour manager, every band confirmed on Chick Fest 2010 (a festival lineup consisting entirely of white male musicians) thought they were heading for Powell’s, the venerated bookstore in Portland (the Oregon one) to register with festival promoters before scattering to their respective showcases.

Rather, they were sent to “Powell’s House” on 43rd Street. Elsie Powell was so disturbed at the battery of trailers in front of her house that she threatened to deploy her brutish 3-year-old chow Marvin. “Marvin hasn’t eaten in a day or two,” Elsie said. “He’s a touch ornery.”

Before anyone was euthanized, the caravan of rock’s next generation cursed their Garmins, cracked open a few PBRs and bolted for an IHOP, and one presumes, Roseland. “At least we didn’t unload anything,” an abject tour manager remarked. “And we can always shower at the Flying J.”