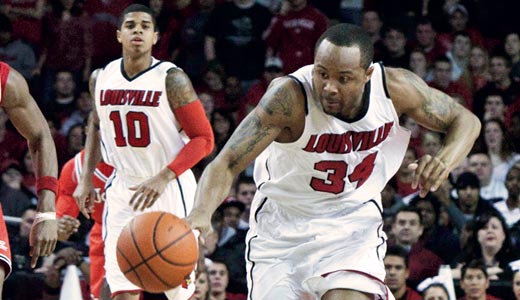 Well, Louisville made it into the NCAA Tournament.

The Cardinals played pretty well often enough against good teams, and not too badly very often against weak teams to wind up with a 20-12 record (11-7 in the Big East Conference) and the overall image of being a darn tough team in a difficult league. “The most important quality in the Big East,” says Louisville coach Rick Pitino, “is persistence.”

And while Louisville may be wildly inconsistent, the team certainly proved to be persistent — good enough to rate a No. 9 seed in the South Regional of the tournament.

If all goes well with Cal, Duke would probably be next for Louisville, in a game CBS has tentatively pegged for prime time TV Sunday night. Louisville would be cast as a decided underdog and expected to lose in time to be back home for classes on Monday. Or maybe not.

Of course, this is a far cry from 2009, when Louisville blazed to a Big East championship and ended up ranked No. 1 in the Associated Press Poll, with a No. 1 seeding in the tournament. That dream expired suddenly when Michigan State extinguished Louisville with a straight-up man-to-man defense in the Midwest Region final.

This is a whole other kind of Louisville team. In the school’s final game at Freedom Hall earlier this month, the Cards drew down the ghosts of 54 years for a glorious 78-68 upset of then-No. 1 ranked Syracuse. A game for the ages. A mere four days later, Louisville allowed itself to be mugged by Cincinnati (same old Cincinnati) in an odoriferous performance in Madison Square Garden. Back to rehab.

But a week later, much is forgiven and hope springs eternal. Everybody knows there’s not much chance Louisville will turn in a serious string of stellar performances — with not one single stinker — but come Friday, the faithful will once again rally with the wearing of red and black.

“Louisville is good enough to beat anybody, but unfortunately, anybody is good enough to beat Louisville,” says former U of L player Chuck Nalevanko, who went on to coach at Louisville Seneca High School and remains a sharp student of the game. “We haven’t shown enough consistency to win at this quality level of competition in back-to-back games. We just laid too many eggs this year.”

But the Cards are, if nothing else, persistent, and their fans are resilient. The school maintains its place in the grand landscape of college basketball, a body of work over time. This is Louisville’s 36th appearance in the NCAA, which ranks fifth behind only Kentucky (50), North Carolina (41), UCLA (41) and Kansas (39).

One fun aspect of NCAA play is the way the tourney creates intersectional match-ups of teams that seldom, or never, play. That’s certainly the case with California and Louisville. The two schools have never played a game against each other. And with a couple thousand miles of country between their conferences, they have faced few common opponents. Syracuse did beat California 95-73 in November, but Friday’s face-off is a mystery.

What would help Louisville most is if all its opponents would agree to play zone defense. But it is unlikely California will oblige. Most teams play man-to-man, and it is pretty well known that Louisville kills zones. Opponents seldom try a 2-3 zone, or a match-up zone, or even one of those “moving hyperbolic parabolas,” as Kentucky’s Adolph Rupp called his zone defense. Louisville simply shoots those to death.

Which is probably why Louisville looked so sharp beating Syracuse twice. Syracuse coach Jim Boeheim has won 831 games with his zone defense. But he knew it was a problem against Louisville.

“I think match-ups have a great deal to do with the outcomes of games,” says Boeheim. “Some teams just match up well against others, and Louisville matches up well against us. Maybe it’s because they also play a zone.”

The Cards hit just 12 of 40 three-point attempts, but that accounted for nearly half their points, and they proved they have the wherewithal to launch 40 at any time.

“No, I wasn’t planning on taking 40 three-pointers,” says Pitino. “But I did tell the team to keep shooting, work inside to out, and I wasn’t afraid. We had those open shots — go ahead and take them. I’m not a big believer that the college three is a difficult shot.”

Of course, finding open threes is more difficult against most man-to-man defenses. If Louisville is looking for an edge, it might be in size and depth. Expect Louisville to try to pound the ball inside to center Samardo Samuels from the start.

But Cal coach Mike Montgomery is sure to see Samuels coming. A West Coast coaching fixture, Montgomery has notched 592 wins in 29 seasons (Pitino has 574 in 24 seasons) and was named Naismith College Coach of the Year in 2000 when he guided Stanford to its first Pac-10 championship in 36 years. Now at rival California, Montgomery this season coached Cal to the team’s first Pac-10 championship in 50 years. That goes back to the Pete Newell-coaching era at Berkeley. The Golden Bears won the NCAA championship in 1959 at Freedom Hall — in a Final Four that included West Virginia, Cincinnati and Louisville. Cal and Louisville missed a chance to meet then, and have never played … until now.

If Louisville can advance past Cal, it will run into a team that would pay to see a zone. Duke is one of the premier outside shooting teams in basketball, often opting for threes even on the fast break.

Sounds like a nightmare match-up for Louisville. Marquette, for example, darts all over the place and shoots threes like crazy — and killed Louisville earlier this season.

“Our guys want to try all the time, it’s just that certain styles really bother us,” says Pitino. “Big teams don’t bother us as much as small, quick teams. Every team has their Achilles Heel, and that’s ours. We’ve just got to overcome it as we get ready for this tournament.”

An excellent scenario for Louisville might be to make some noise in this tournament, with an eye to next year. Louisville is mostly sophomores and freshman. Center Samuels and exciting guard Peyton Siva will be back. If the team could add some heavy-duty rebounding and forward-sized scoring talent in the offseason (a Yankees-style shopping spree!), that would be valuable. Play well this year and return for a 37th NCAA Tournament with even more expectation. That’s what it says here.

Looking at the 2010 NCAA tournament, anyone would begin with Kansas (32-2) and Kentucky (32-2) — the teams with the best records in college basketball this season, and among the best ever. Both the K teams, along with North Carolina, topped the 2,000-victory all-time plateau this year. Kansas and Kentucky finished one-two in the polls, and after that it’s pretty much others who might.

“I would be surprised if we didn’t see Kansas and Kentucky in the championship game,” says Nalevanko. “Those two teams are so talented and so deep.”

The ex-coach says upset-minded opponents need to alter the nature of the contest.

“You want to shorten the game against them,” says Nalevanko. “You don’t want to play the up-tempo game they love to play. You want to peck at them, take the clock down, and try to match up with them athletically in a shortened game. Then hope things work out.”

A perfect example came in the 1983 NCAA Final Four in Albuquerque, N.M.; Houston looked like a cinch after beating Louisville in the semifinals. But in the championship game, North Carolina State “pecked away” at Houston. N.C. State coach Jim Valvano slowed the game to a crawl in the final minutes with out-of-bounds plays, ticky-tack fouls, loose balls, clarifications with the referees and TV time-outs that all served to disrupt the tempo of the game. The last two minutes seemed like an hour — and Valvano’s team finally won. You could almost hear Phi Slamma Jamma asking, “What happened?”

That’s the ticket against runaway freight trains like Kansas and Kentucky, too. You don’t let them phi slam and jam. Peck away.

In the East, Texas, a team that wouldn’t have a notion of how to peck, could be one of the few threats to Kentucky. The Longhorns were once ranked No. 1, but fell apart as the season progressed. But they’ve still got talent and, the expert says, nothing to lose. More likely to torment Kentucky, though, are the Philly kids at Temple. The Owls’ toughness might be a shock for an inexperienced team that has been playing in a fraternity league.

Kansas has more potential roadblocks, Nalevanko says. “Look at the teams with tradition in their bracket. Maryland, Michigan State, Georgetown, Ohio State — all of them have won national championships. And they’re tough teams from power conferences with plenty of premier athletes.”

Plus, Nalevanko has a warning about Northern Iowa — an out-of-the-way obstacle that could get in Kansas’ way this weekend. It’s a team of wily veterans who know how to wind the clock down carefully before shooting.

Meanwhile, ESPN analyst Jay Bilas has a different take on things. He starts his handicapping in the Big East, which he covers regularly, and which placed two teams in the Final Four last year.

The opinion here is the experts are both probably right. Kansas doesn’t have holes, and Kentucky looks like it’s got a greased skid to the Final Four in Indianapolis.

Kansas was out-shot by Oklahoma State, and might be out-shot again. Maryland guard Greivis Vasquez is the best to see shoot.

Speaking of the Big 12 Conference, there has been some wise-guy chatter about Texas A & M and Baylor. Texas A & M reminds us of Guy Lewis’ old Houston teams: You know they will be tall. Baylor played well in last year’s NCAA, but since then the school has named a new president — Kenneth Starr. Can you believe it? And you know there are actually people in Texas, including the governor, who have been talking about seceding from the union?

While drawing lines through those teams, we’ll also chuck the chances of most Big East heavyweights — except for Georgetown, which is the crème team of the East. We’ll take the Hoyas to beat Kansas in the Midwest. Tab Kentucky in the East, Duke in the South. And Butler as the long shot special out of the West.

The Bulldogs are the exact opposite of Louisville. No high school All-Americans. No network TV dates. And they are the model of consistency. Butler (32-4) went 18-0 in the Horizon League, the only undefeated conference winner, and is currently riding a 20-game winning streak. If the Bulldogs could fly back to Indianapolis with the regional nets from Salt Lake City, that would be all the story. (Now’s the time to hop in the carriage with Cinderella before everyone else catches on.)

Last lines: There will be plenty of patter during this tourney about the NCAA going to 96 teams next season. Personally, we’d like to see the thing opened up to EVERY team. Sell off all the conference tournaments at 5 cents on the dollar and let everybody go at it in a Big NCAA.

And get rid of seedings. It’s the most unfair and unsportsmanlike aspect of collegiate sports. Seedings are something rich tennis people made up at the country club.

Get rid of it.