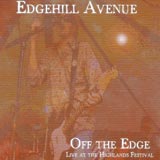 Edgehill Avenue sounds like a great band. They’re rooted in the classic rock and soulful blues that sappy music critics (myself included) go crazy over. The guys write downhearted songs that are as solid as their sound. On Off the Edge, a live album recorded at last year’s Original Highlands Festival, the band gives a solid performance. The biggest problem is the sound quality of the recording. At times it barely sounds better than a bootleg passed among uber-fans. A band this good should have a live document for their fans that simply sounds better. Rambler is probably a great listen, but on Off the Edge, songs like “Summer Rain” and “Don’t Come Round Here Anymore” get lost in the distant, muddled mix.