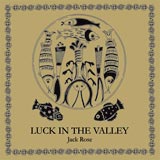 I admit I once did not care much for the music made by Jack Rose. It was inarguably accomplished, but I felt it groaned under the weight of its influences: namely, ragtime picker Blind Blake, “American Primitive” progenitor John Fahey and Vishwa Mohan Bhatt, who introduced the guitar to Hindustani classical music. It wasn’t until last year, when Rose released his collaboration with the Black Twig Pickers string band, that his artistry was revealed to me. Eschewing the modernizing tendencies that for eight decades have adulterated, complicated and cluttered America’s rural music, his open tunings and solid right hand laid bare the modal essence at its ancient core and linked it in spirit to the great musical drone traditions of the world, from subcontinental ragas to the West African griot praise songs that originally sired the blues. That was his catalog: a distillation of influences to their essences. Jack returned to essences in December, suddenly, at the age of 38. His posthumous album is a testament to the virtuosic versatility of a devoted listener, arranger and player gone too soon.