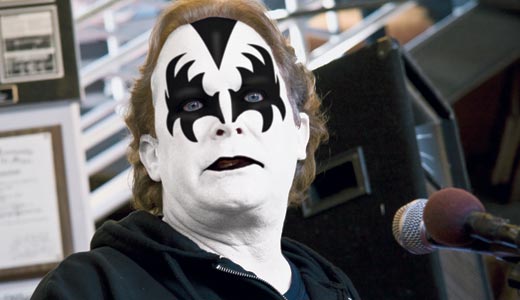 In a press conference last week, KISS bassist-turned-reality TV star Gene Simmons took a break from writing his forthcoming autobiography for Viking Press, “My Beautiful Face,” to announce he will be donating the royalties of KISS’s smash video hit, “Let’s Put the X in Sex,” to the struggling independent record store.

“When I saw the video of Mr. Timmons’ press conference, I thought, he’s just like me!” Simmons said, as he sat in a chair receiving his latest Botox injection. “And he has X in the title. Obviously the guy appreciates the third to last letter of the alphabet.”

Timmons, for one, is thrilled by the announcement. “Gene is such a trooper. I mean, he took the makeup off for the press conference. It was a bold move. We graciously accept this gift. Rock ’n’ roll all night!”