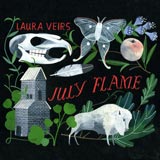 “Rapture” was the first Laura Veirs song I ever heard. It was buried mid-album on Carbon Glacier, furnished with a simple guitar/keyboard arrangement and Liz Phair-levels of keylessness. It was an oddly haunting song and I liked her imperfect voice and vaguely apocalyptic lyrics. I looked in to some of her older albums and found more of the same there. When July Flame came across my desk, I assumed I had a pretty good idea of what it would sound like, but it turns out she can sing really nicely and has learned a thing or two about multitrack recording. Like her past releases, July Flame is a collection of folk songs you’ll like listening to; at her finest moments, she has something in common with a lesser Neko Case. The standout track is the title one; it’s romantic and folksy without being overly rustic, referential or exploding into a dust of rose-scented clichés.