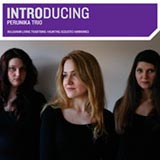 It’s unlikely you’ll hear another record like Introducing anytime soon. The album isn’t just stylistically quirky – it traffics entirely in choral Bulgarian folk songs, which are alien to most Western pop music listeners. The record is mostly a cappella, and none of it’s in English. In other words, it’s hardly going to be everyone’s cup of tea, but if you’re in the right frame of mind, Introducing is fascinating. Staring down 48 minutes of this music is daunting, and while the tracks predictably bleed into one another a bit, the group shifts from haunting Gregorian-style harmonies to joyous, incantational chanting to almost Middle Eastern-sounding melodies. Introducing is ultimately rewarding for the dedicated listener, and its utter uniqueness to Western ears should shock even the most jaded music snob.