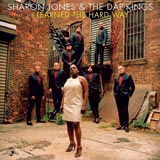 Sharon Jones and her fearless Dap-Kings return with their most assured and adventurous album yet. Entrenched in retro aesthetics (“Recorded on Ampex 8 Track Tape!” screams the press release), this album might be their most complete, as if past records had one cringe-worthy cut, usually covers (Janet Jackson’s “What Have You Done For Me Lately”).

Hard Way experiments. Much of the album is their stock-in-trade, chunky Lyn Collins-style funk, but it opens lush (“The Game Gets Old”) and ends with bare-bones, late-’50s/early-’60s soul of “Mama Don’t Like My Man” (think: Sam Cooke’s “Jesus Give Me Water”). Easily one of the most consistent groups working today, Sharon and the Kings have another keeper.