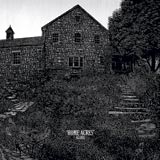 Home Acres generates heat right out of the gate with “Building a Fire,” an inventive contrast of languid atmospherics with almost unbearably tense rhythm. The skittering “Moonless March” suggests a more mature Tokyo Police Club, but Aloha hit pay dirt on the giddy rush of “Searchlight,” which glides like a less angular Futureheads and whose dense web of coruscating guitars and heart-tugging melodies would do Johnny Marr proud. Other similarly classicist influences bubble under the record’s surface as well — the lovely, understated “White Wind” and “I’m In Trouble” recall the tenor if not the thrust of vintage R.E.M., while the closer “Ruins” has a little Squeeze lurking in its lithe, melodic chorus. These influences not only make Home Acres eminently listenable, but also give Aloha considerably more depth than most current post-punk revivalists.