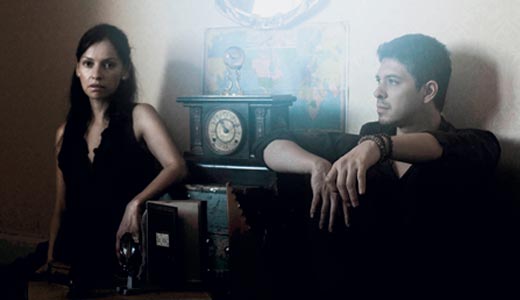 Rodrigo Sanchez and Gabriela Quintero recorded “11:11” at their home studio in Ixtapa, Mexico.photo by chris strong

Rodrigo Sanchez and Gabriela Quintero know they’re not the first guitarists to fuse Latin rhythms and rock. To them, knowing your history is vital. On the liner notes to their new album, 11:11, the Mexican-born duo pays homage to string heroes like Pantera’s Dimebag Darrell, Jersey City’s jazz fusion impresario Al Di Meola and Alex Skolnick.

“As a rock act, to make this album was totally to share and contribute to music somehow,” Sanchez says. “We want to share with people the kind of music that we like.”

Their originals are hard to beat, though. Produced by John Leckie (Radiohead’s The Bends, My Morning Jacket’s Z), 11:11 took shape at the artists’ studio in Ixtapa, Mexico. From the opening snap of “Hanuman,” Sanchez and Quintero waste little time letting their fret pyrotechnics do the talking on instrumentals that incorporate influences close to home and abroad.

A minute into “Savitri,” a door opens, as if someone’s walking in on a jam, and the song trances out over tablas and background drone. Sanchez wanted an Indian flavor after seeing musicians perform in a cave there. “I wanted to recreate this kind of atmosphere I saw there, where there are mantras going on.”

Both are environmentally conscious. Their blog, B Major, links to groups and articles relating to vegetarianism and climate change, an issue Sanchez says affects everyone.

“It’s not about ourselves or the music itself, it’s about how to create something that really helps and to know the world and to get over these issues that we are facing,” he says, adding that the burden of change doesn’t rest solely on politicians. “We can’t wait for government to do everything for us, that governments are going to be like our parents and will save us all the time. You grow up, and you realize they are human beings, and they make mistakes.”

Alex Skolnick Trio opens Sunday’s all-ages show. Born in Berkeley, Calif., Skolnick has found acclaim in both the jazz and metal worlds. He’s toured with Testament, Megadeth, Slayer, Judas Priest and White Zombie, and is a featured member of the Trans-Siberian Orchestra. The trio’s Goodbye To Romance: Standards For A New Generation reached the top 30 in jazz radio charts in the early 2000s.