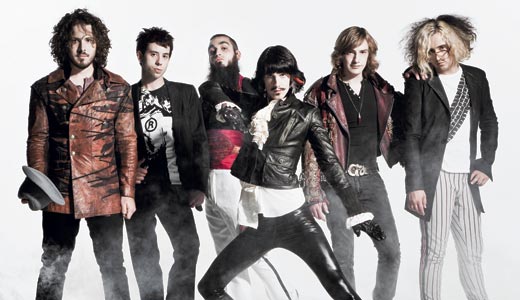 Some people are born celebrities, their personalities too large to be contained. They become known at a relatively young age and become the subject of stories told by people they haven’t even met. A handful of these figures become known by a single moniker, shedding their given name forever: Prince. Madonna. Sting. Daisy.

If you’ve lived in Louisville and followed the local music scene at any point over the last decade, you likely know of Daisy (he’s dropped his last name, Schwartz). His Jimmy Page-meets-Sideshow Bob-meets-Bride of Frankenstein coif is the first thing most people recognize.

If you’ve ever met him, you probably felt old, regardless of your age, as his antics are that of an insane, Ritalin-depraved teenager bouncing off the walls doing the first thing that comes to mind, rarely voicing the words, “No, I won’t do that.” If you didn’t just shrug your shoulders and walk on and actually engaged him, though, your opinion likely changed. The kid had something going for him. Wild as he was, Daisy was working full time, acing advanced classes in school, and making a name for himself as an accomplished bassist.

“Ayin was my first real band that played out,” he says. “It began as an industrial, ambient, arty noise thing.” The band got its start in 2000 and released a DIY EP. After taking a break for school, Ayin cranked out two more albums: the critically acclaimed Nothing Islands on local Brightskull Records and Fear of Tigers on New Jersey’s Engineer Records (“We released it and never heard from them again…”).

But it was during a trip to Nashville that Daisy’s musical career changed directions due to a chance meeting.

“Foxy Shazam played an early show with Button Masher in Nashville … I drove down to see them after hearing they were good, and we hit it off really well. Somewhere within the first year of knowing them, they asked if I wanted to play with them.”

Daisy gigged with the Cincinnati-based band and Ayin until 2007, when Ayin stopped playing. At that point, Daisy became fully committed to Foxy. The band negotiated a deal with the indie label Ferret Music, released Introducing Foxy Shazam to critical acclaim and set out on a three-year tour. Meanwhile, Daisy managed to keep up with school and obtain a bachelor’s degree in history.

While on the road, Foxy was dedicated to networking and making connections to help build a name. Daisy recalls how Foxy guitarist Norm Loren Turner would spend hours on MySpace, work that eventually paid off when he made contact with John Feldmann, frontman of the prominent Los Angeles-based punk band Goldfinger.

“(Feldmann) writes back and says to send him a demo,” Daisy says. “We do, and he kind of noncommittally says, ‘Keep doing what you’re doing.’”

Foxy kept in touch, and as the band progressed, Feldmann ultimately wanted to work with then. “Sire Records came through him, and he produced the new album,” Daisy explains.

On Foxy, Eric Nally sings more theatrically than on past records. “Eric’s really come into his own as a singer,” Daisy says. “The album’s definitely more rock, less abstract. It has that big, ’70s rock vibe, and some things that are more interesting, not experimental. But we have a song called, ‘The Only Way To My Heart Is With an Axe,’ and it sounds like a Disney film song, like how the octopus in ‘Little Mermaid’ had this big, evil song. It feels like that.”

Sire appears to have their eyes on the long run for Foxy Shazam, a different approach from the usually ADHD nature of modern-day record promotion. “They are definitely very vocal about wanting to build us up,” Daisy says. “Even if this album doesn’t do well, this is a stepping stone. There’s not this expectation that if it doesn’t sell a million copies, or the 2010 equivalent of a million copies, there’s a problem.”

The album’s first single, “Unstoppable,” was played on network television during this year’s Super Bowl broadcast, an audience few bands ever get.

With the addition of trumpet player Alex Nauth, the band members’ specific roles have solidified. “Foxy’s pretty specialized in that way. Alex has helped a lot with making the lyrics more melodic. He and Eric focus on the words, while Sky (White, piano) and I focus on the music. Norm is really good at structuring. The whole thing has become very efficient.”

Foxy Shazam recently opened in London for a newly reformed Hole. Their spring tour, which began Monday in Nashville, stops at South by Southwest on March 19 before wrapping up April 27 in St. Louis. A Louisville date is in the works.

“Now is a really interesting time to be alive,” Daisy says. “Especially to be in a band, this band, in the position we’re in. No one really knows what’s going to happen, but ultimately that may not be a bad thing.”