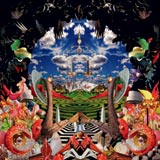 On their debut, Brooklyn’s Golden Triangle create an endearing racket so simplistic, it’s a wonder it took six band members to create it. The record has a cavernous, distant-sounding production that feels coated in appealing layers of grime, and while the songwriting is a little undercooked, the band has panache to spare, and their amateurish verve makes for an engaging listen. Standouts include the knee-slapping, minor-key thump of “Death to Fame,” the churning guitars and narcotized melody of “Neon Noose,” and the mid-tempo grind of “Blood and Arrow,” on which singers Carly Rabalais and Vashti Windish find the sweet spot between Young Marble Giants and the B-52s. It’s not always pretty, or deep, or even particularly tuneful, but Double Jointer is an effective, enjoyable debut that makes a convincing case for Golden Triangle’s potential.