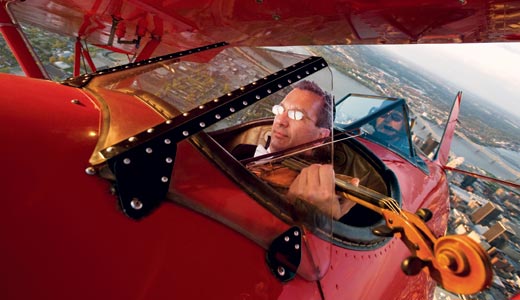 Just a half-step on the scale. Two notes.

But that little half-step, says Louisville Orchestra violist Jack Griffin, is a musical move that may evoke a special emotion in the listener — one Griffin thinks the audience might feel when he performs the viola soloist’s role in Hector Berlioz’s symphony “Harold in Italy” in concerts Thursday and Friday at Whitney Hall. The program also includes Bela Bartok’s beautifully austere “Concerto for Orchestra.” Jorge Mester conducts.

The half-step imparts a feeling of foreboding, says Griffin.

“As I’ve gone around talking to different arts groups and audience groups and school kids about ‘Harold in Italy,’ I always play the opening of it. Then I ask, ‘What composer in this century has made a trillion dollars off the half-step?’ I tell them, ‘You can name the tune in two notes. Everybody knows it.’ Then I play it: da-DUM! And everybody goes, ‘Oh, sharks!’”

It’s the theme from the movie “Jaws,” by John Williams, with an ominous E to F half-step, cello and bass: Da-DUM! That big shark is coming.

Of course, there are no sharks after “Harold in Italy.” It’s not a horror symphony. But there is an edge of apprehension.

“And you can hear it right away, the first time the viola comes in with the symphony,” Griffin says. “It’s Harold’s theme, and it’s easy enough to kind of focus on that, then just enjoy his theme every time little snippets are quoted through the symphony — Oh, there he is.”

“Harold in Italy” isn’t a viola showpiece. Griffin plays solo out front (“I’ll have my shoes shined,” he laughs), but it isn’t an exhibition of virtuosity. The solo viola is a role, played with the orchestra. “Kind of overlooking things” is the way Griffin sees it.

If all that sounds unusual, it is. And certainly was when Berlioz came up with the idea in 1834 — a period when the French musician emerged as one of the first Romantic composers. Maybe the first. The half-step was but one of many ways Berlioz orchestrated emotion and color into music. Instead of numbering his symphonies, for example, Berlioz named them, beginning with his landmark “Symphonie Fantastique,” which explores … well, the fantastic. One passage pictures skeletons dancing, with the strings playing col legno. Players flip their bows and tap wood against the strings to create a sound like clanking bones.

Romantic poet Heinrich Heine loved the musical imagery, hailing Berlioz as, “an immense nightingale, a lark as great as an eagle. The music causes me to dream of fabulous empires filled with fabulous sins.”

The Romantics were nothing if not dreamers.

Berlioz’s “Harold in Italy” references the Childe Harold character created by poet Lord Byron. In that day, in that world, all the budding Romantics would have known Childe Harold. So strong was Byron’s pull, some of his followers actually followed him around.

But what “Harold in Italy” is really about, says Griffin, is Berlioz in Italy. The composer had won a cash prize for “Symphonie Fantastique” and set off with his mistress for a jaunt in southern Italy.

“The first movement is basically Harold wandering in the Abruzzese Mountains,” Griffin says. “So it starts very foreboding and mysterious with the half-steps, which all through music history that half-step has been something kind of sinister. I picture it as somebody climbing the mountain, where they are watching every step really carefully. By the time the viola comes in, he has made it to the top and he’s feeling really good, and there’s that Harold theme that kind of permeates the whole piece.”

In later movements, Harold (or Hector) meets up with a group of religious pilgrims, with a hint of Gregorian chant. “There’s this really cool place in the second movement where there’s a little march going on in the cellos and basses, with beautiful sustained chords in the rest of the orchestra — and the viola is doing these arpeggios ponticello, playing with the bow practically on the bridge to give it a really scratchy, ghostlike effect. There’s very little string left to vibrate.”

Somewhere else Berlioz paints a lush landscape. And then there are bawdy bandits. “Everybody can paint their own picture of what they’re hearing,” says Griffin.

It’s what Berlioz is about: painting the poetry.