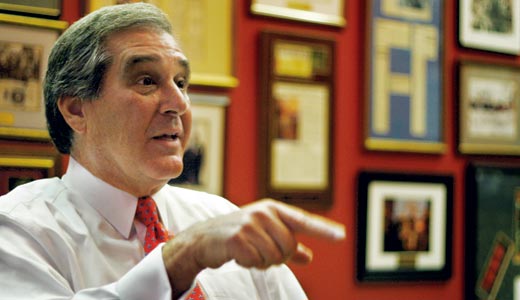 For the past three days, local journalists, city lawmakers and concerned residents have questioned why Mayor Jerry Abramson has inexplicably missed several scheduled appearances, including a ribbon-cutting at a new downtown business.

But before that meeting began, the news broke: The outgoing mayor was chained up in Metro Hall. The Louisville Metro Police Department’s SWAT team immediately responded, assuming Abramson was being held hostage. It soon was revealed, however, that Abramson had in fact chained himself and swallowed the key.

A hastily written press release said it was a symbolic kick-off to his re-election campaign as mayor. From outside, people could hear Abramson yelling that he will register as an Independent in the upcoming general election in November.

“I’m not going nowhere,” he yelled. “This city can’t go on without me. I run this town. You all just live here!”

After witnessing the toothless backwardness and good old boy incompetence in Frankfort, the “Mayor for Life” changed his mind about running for lieutenant governor on Gov. Steve Beshear’s ticket. Though the two longtime friends were jubilant about their partnership when it was announced last summer, the anti-Louisville sentiment in the commonwealth may have been too much for Abramson.

“The mayor is a likeable guy, and honestly, the voters in the rest of the state hurt his feelings,” says Chad Carlton, a mayoral spokesman. “Therefore, he will continue to serve this community as mayor as he has for the past two decades.”

The governor would not comment for this story, but sources close to Beshear say he is dealing with bouts of depression engendered by their very public break-up.

“The man’s first lieutenant governor basically called him every name in the book, and now this. He’s devastated,” a source close to the governor tells LEO.

The announcement that Abramson will seek another term has shaken the political ground in the city. Several mayoral candidates are reconsidering their bids, while others are missing altogether.

“I think I’ll sit this one out,” says Councilman David Tandy, D-4, adding there’s always 2014. “In fact, to demonstrate that I can build bridges in this community, I plan to file a resolution extending mayoral term limits.”

Other candidates, however, say they’re determined to stay in the race and bring a new vision to the city. That pledge will be easier said than done due to pushback from the refueled Abramson machine. The mayor’s Independent candidacy has already raised $120,000 in less than two days, and there have been strange coincidences to boot.

For instance, Democratic mayoral candidate Tyler Allen tells LEO his campaign offices were recently burglarized. And though he won’t point any fingers or pursue the investigation, the co-founder of 8664 says the reign of Abramson has returned with a vengeance.

“I got a note that said 86-yourself,” says Allen. “I feel like we’re back to square one in this city.”

The campaign headquarters for Republican mayoral candidates Chris Thieneman and Metro Councilman Hal Heiner, R-19, also were raided, and neither mayoral hopeful has been seen in days.

Checking to make sure his office door was securely locked while packing up his belongings, Councilman Kelly Downard, R-16, who challenged Abramson back in 2006, says it would be wise for everyone running to leave town.

The east Louisville Republican unbuttoned his shirt to show several scars and wounds he sustained during his mayoral campaign. Because his assailant was wearing a mask, Downard is unsure exactly who carried out the pre-election assault, recalling only that the man had “an unusually large head” and was wearing “a disturbingly tight spandex number.”

Assuming Louisville voters blindly endorse Abramson (as expected), Downard says the longtime city leader is likely to unleash his wrath without an official party to keep him in check.

“He’s pulling a Joe Lieberman, it’s unbelievable,” says Downard. “I mean, the continuation of this administration’s mischief is really going to set us back. That’s it. I quit.”

On the flipside, many developers and business leaders believe the return of Louisville’s chief cheerleader represents the end of its economic woes.

“I told the mayor personally that I was happy to hear he was considering another bid,” says Blake Cordish, a senior vice president of The Cordish Cos., developer of Fourth Street Live. “Let the good times continue.”