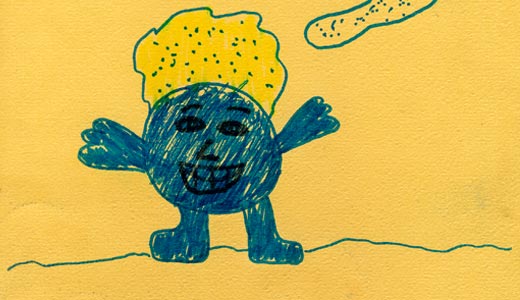 While there’s no white whale in “Blueberry Mary,” the similarities — including pure literary genius — between this book and Herman Melville’s “Moby Dick” are endless. With its astute writing style and profound message, it’s hard to believe author Sara Havens wrote this for a class assignment 11 years ago while in high school. The only thing this book is missing is a sequel.

The story focuses on the character of Mary, who has a penchant for eating blueberries. While the supporting characters, including her mother and father, warn her that she must eat a balanced diet, Mary pays no mind. She continues to consume the antioxidant-containing fruit until, literally, she becomes what she eats — Mary transforms into a human blueberry. She must now navigate the world as an outsider. It is in these three pages the book reaches its pinnacle. The protagonist, while at first liking the sudden attention, soon longs for the days when she was a normal teenage girl, watching “Melrose Place” and giving handjobs behind the bleachers.

With the author’s permission and to truly give you a sense of literary perfection, LEO Weekly has decided to publish the entire “Blueberry Mary” novel in this space. Unfortunately, we could not include all of the author’s amazing Picasso-esque illustrations that accompany each page. We suggest you run, don’t walk, to your nearest bookstore and demand a copy of “Blueberry Mary.” When the store clerk checks their database and shrugs, e-mail the author and ask to borrow the only copy that exists.

Once upon a time, there was a girl named Mary.

The only thing she ate was blueberries.

Her mother offered her ham, cereal and potatoes.

The only thing Mary would do was turn up her nose.

“You need to eat other things,” her mother said. “To grow big and tall.”

But the only thing she would eat was that blue little ball.

For breakfast she had blueberry juice.

Her mother argued, but it was no use.

And then for lunch, it didn’t stop.

She ate a peanut butter and blueberry sandwich with blueberry pop.

Finally for supper, you may be surprised,

She had a blueberry cheeseburger with blueberry fries.

After a couple of days went by,

Mary’s craving still did not die.

Her father said, “You are going to turn into what you eat.”

However, just then, she noticed the blue on her feet.

The color crept up her legs and to her knees.

It wasn’t before long she was as dark as the deep blue seas.

Something happened then, everyone saw.

For Mary had just turned as round as a ball.

Everyone in town could only say, “Poor Mary,”

For she had turned into a live, walking blueberry.

People came from everywhere, even Beirut.

Just to take pictures of this human fruit.

Everyone thought it was the next best thing to the light bulb invention.

Days passed, and time went by.

She had gotten several offers to be in a pie!

She didn’t want money, or anything formal,

For now, all she wanted to be was normal.

Her parents wanted this, too, they didn’t like it a lot.

So they decided to stick her with a pin, give her a pop.

The needle jabbed in, without a sound,

Then poor Mary was zooming around.

She flew across the desert and the ocean, too.

She even flew over the land of the kangaroo.

Everything in her path was covered in blueberry,

Out it poured from sweet old Mary.

Nothing was spared as Mary hurled,

It looked as if the Smurfs had taken over the world.

Mary deflated as she lost her juice,

She even colored the famous red caboose.

As she floated down to the ground,

She noticed she was in her own town.

Luckily she had made it to her backyard.

Her parents came running with a surprised look and a grin,

For Mary’s natural color had come back again.

Her father’s warning had come true,

And for years after, Mary couldn’t stand to see anything blue.

The moral of this story is not about this little fruit.

It’s that you shouldn’t eat your favorite food till you feel like you’re going to puke!

You should eat a balanced diet, this is true,

Or this situation could very well happen to you!

Always keep this in your head,

The wise words her father once said,

“You are what you eat,

From your head to your feet.”