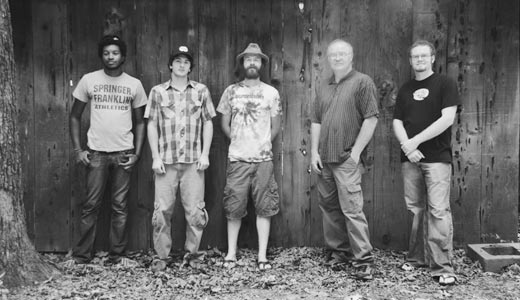 Paducah, Ky., isn’t outer space, but Bawn in the Mash describes itself as intergalactic folk and Americana. Through three studio albums and a 2007 live one, the aim has always been testing limits.

“Compared to the other three records, it will be the same feel, the same band,” says mandolin player Thomas Oliverio. “I’m looking forward to spending time with them to see how they come alive in the studio.”

This month, they’ll hash out roughly 20 songs at an old Sears house in Paducah’s arts district, only it will be without founding member Nathan Blake Lynn. In July, Lynn left Bawn to start a solo career and moved to Chicago with his wife and son. “He was a huge, huge, huge part of the band,” Oliverio says. “He’s one of the best country singers there is around. It was easy to rely on him to carry the show.”

Despite Lynn’s departure, Oliverio said everyone has adapted quickly, and the change has brought out different strengths. “The last five years we’ve put a lot of groundwork in.”